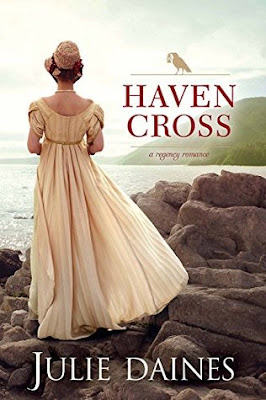 When a shocking scandal involving her father spreads through London society, Elaine Cardinham and her parents are forced to retreat to their country home in Cornwall for refuge. But Havencross is no sanctuary for Elaine. She is haunted by the mysterious disappearance of her brother—and the heartbreak she left in her wake all those years ago. It has been five long years since Gareth Kemp last saw Elaine—when she rejected his marriage proposal. Her reappearance convinces him of one thing: he has never stopped loving her. To put his feelings for her aside, he focuses his attention on the dangerous smuggling plaguing the Cornish coast. As Elaine attempts to run from her past, she ventures ever closer to a dangerous truth—and Gareth may be the only one who can save her from a deadly finish.

This book felt like a movie playing out in my head.  It was so easy to visualize the scenes and the character interactions.  I love when that happens.  And isn't the cover so pretty?  I love it.

Elaine has been publicly humiliated, her family disgraced.  They move from London to Havencross in Cornwall.  There Elaine has to face not only her buried feelings of loss for her brother, but the love she left behind- Gareth.

Gareth is a steady sort of man.  Strong.  I loved him.

This book was an excellent mixture of mystery, intrigue and romance.  I loved how the mystery played out and how the book built in intensity.  So very good!