Always You (A Magnolia Falls Novel) by Ruth Roberts 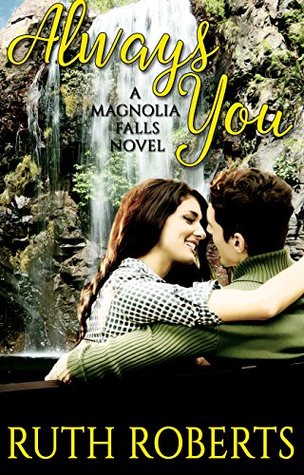 After tragedy strikes, Diana Mathison finds herself back in her home town of Magnolia Falls, sharing custody of her baby sister with her step sister. Reeling from the death of their parents, the three sisters have to learn how to lean on each other and live life without their two pillars of strength. Diana is full of doubts in her ability to raise a little girl and run her father’s law firm. The last thing she needs is to have Zack Connelly back in her life. The last time she let him in she ended up hurt and broken hearted.


Zack has given up on true love. It’s not for him and it’s certainly not with Diana Mathison. He came back to Magnolia Falls to heal after losing his sweet wife and their unborn child at the hands of a drunk driver. Hannah never had a chance at the love and happiness she deserved, therefore neither should he. His life plan is to take care of his sister and niece for as long as they need him, and to be the best veterinarian the town has ever had. That’s enough for him…or is it?

Second chance at first love stories are some of the best.  Even though Diana and Zack were more friends who secretly crushed on the other, and not necessarily in love, there was always something there for both of them.  Their friendship ended rather abruptly and in a way that really hurt Diana so now that Zack is back in the same town as her, old feelings are coming to the surface.

Diana has a tragic past and present.  So many heart breaking things have happened in her life but she is so resilient and strong.  I loved the kindness that Diana just naturally had.  Forgiveness to her sister and other high school tormentors seemed to come so easy for her.  I loved that about her.

Sometimes I felt like there was just too much going on in this book.  Was my focus supposed to be on Diana and Zack or her sister and Logan?  Because there seemed to be multiple stories happening and I think I ended up missing that total character development.  Things seemed more glossy and less meaty.  I was also missing the emotional connection to the characters.  There were so many heart wrenching things happening, I wanted to feel more.

While this book wasn't my favorite, it was okay.  I appreciated that it was clean and I also enjoyed the themes of family and forgiveness.

Content:  Death, bullying, eating disorder
Posted by Getting Your Read On at 3:26 PM