Beyond the Narrows by M.R. Durbin + $25 and Book Giveaway 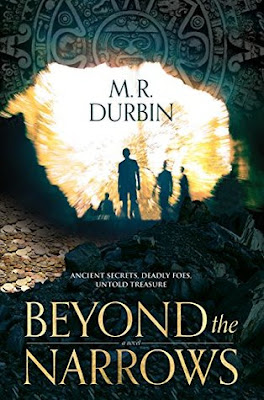 You’re never too old for an adventure!

After being the subject of an explosive assassination attempt, O’Reilly (Obie) Begay, a retired Navajo archaeologist, finds himself in the middle of the hunt for an ancient record—the personal journal of a Spanish Templar leading to a legendary treasure.

When Obie tracks down the journal, he enlists fellow retirees Peter, Bill, and Jack to assist him in following its clues. Facing gunfights and car chases, the treasure hunters locate a 500-year-old Mayan codex, the next clue on their adventure. Peter’s grandson, Charley, and Obie’s granddaughter, Mac, come along for the quest, but they may find themselves drawn to a different kind of treasure.

Constantly one tiny step ahead of their enemies as they scour the caves, cliffs, and canyons of Southern Utah, Obie’s team will have to rely on each other if they want to reach the treasure before their pursuers. But what will they do if not all in their numbers can be trusted?

I think the thing I loved most about this book was the setting of Southern Utah and it's beautiful red rocks and canyons.  I spent my earlier years growing up in this area- Hurricane, actually.  And that's Hurri-cun not Hurricane.  I laughed at that part in the book because that's exactly what we all used to say all the time.  I was little when I lived there but I hated when people said it wrong.  It made me mad.  Ha!

I also loved the reminder of the storms that caused flash flooding.  We had a "wash" behind our house and when the storms hit the mountains, we had flash flood waters that came in hard and fast.  The wash was a dangerous place and I was forbidden to play in it because you never knew when those waters were going to come.  It could be sunny at my house but raining in the mountains.  I was scared to death of the wash.

So, yeah.  The setting brought back lots of memories for me.  I could easily imagine the places because I have been to them or places similar to them.  As for the story itself, it was okay.  It wasn't the best mystery/adventure/suspense book I've read, but it was okay.  None of it really engaged my feelings.

This book has an unusual group of main characters.  Three of them are older, retired men who are friends.  They each bring their own set of experiences and knowledge to the group.  Mac and Charley are younger and needed in the plot for their vitality and more youthful energy and abilities.  This book has a lot of treasure hunting and running from bad guys.  It's set up in the end for another book to follow.

Content:  Mild violence, LDS fiction (many conversations and references to things specific to the LDS religion).