I Am Delilah by Josi S. Kilpack 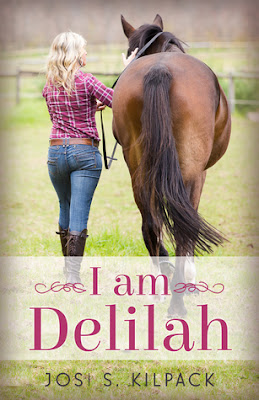 Although Delilah works in New York, she’s a small-town girl and eager to finish her job as a nanny and return to Big Fork Montana where she’ll marry her high-school sweetheart. When she ends up the focus of a Hollywood stunt centered around her being the Oscar date of Hollywood heartthrob Sam Hendricks, life as she knows it becomes a thing of the past. Delilah promptly refuses him, only to find that it isn’t so easy to step out of the limelight once you’ve ended up in the middle of the public eye.

Sam Hendricks is not used to taking no for an answer, and when his rejection become a leading story, he determines to do whatever it takes to turn the tide of public opinion back in his favor. Again and again Delilah refuses him until she proposes an offer—if he’ll spend two weeks on her family’s dairy farm, she’ll be his date to the Oscars. In no way is this a fair trade, but Sam feels he has no choice and therefore agrees to her proposal—they both agree no one will ever know.

Unfortunately for them both, there are plans other than their own at play, and when everything goes wrong they are faced with another fallout, bigger than the first.

(I AM DELILAH was originally published as STAR STRUCK in 2004)

I have vague recollections of reading this book way back when it was first released under a different title.  It's been a long time though so most of it felt pretty new to me.

If you are looking for a romance, this story may disappoint you.  It's less of a romance and more of, well, I'm not sure what I would label it as.  A story of a growing friendship and learning maybe.

Delilah and Sam are both flawed and have their mean moments.  Of course, those were not my favorite bits, but they both were learning and figuring things out.  Both Sam and Delilah have somewhat warped ideas of how the other lives and as they come to know each other better, those perceptions change and soften.

This book was good but it wasn't my favorite.  It was clean though and I really appreciate that.  Josi Kilpack is a fantastic writer and I've loved so many of her books- especially her more recent ones.