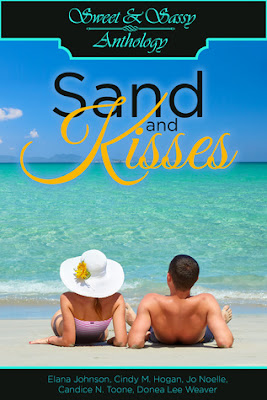 Open for Love by Elana Johnson
Sabrina Arnold loves running her family's Bed & Breakfast in sunny New Orleans. What she doesn't love is the new establishment going up right next door. While Bri's snooping around the place to see how it compares to hers, she's caught by tall, dark, and handsome Carter Hammond.
What she doesn't know is that Carter owns the property where she's trespassing, though he claims he doesn't. He's in New Orleans to start his first business venture, get out from underneath his father's thumb, and learn about the mother he's never known. As he and Bri spend more time together, he knows it's only a matter of time before she finds out that he owns the building she hates. Can their fledgling, summer love survive against the odds?

Secrets in the Sand by Cindy M. Hogan
Sometimes staying hidden, even for a spy, is nearly impossible.

Christy Hadden, spy extraordinaire, thinks she’s created the perfect getaway in beautiful South Beach, Florida. A place where she and her handler, Jeremy, can give their forbidden romance a chance - in secret.

But when they hear cries of alarm in an alley nearby, they can’t resist the pull to help, even if it exposes them. And when Christy becomes a person of interest in a murder committed in that same alley, they must hunt down the real killers and clear
Christy's name.

In this game of hide and seek, it seems their secret is sure to be found out. Christy may have to choose between the love of her life and her life's purpose - and the stakes are higher than she ever bargained for.

Life’s a Beach by Jo Noelle
Jenna Brennan doesn’t believe in love. She doesn’t believe in marriage, and she’s learned to only count on herself. At her Uncle Walter’s insistence, and a little emotional blackmail, she returns to Misty Harbor Cottages to help him for one last summer in a place that's really the only home she’s ever known.
Cole Zamora has worked at Misty Harbor for more than half of his twenty-three years, and imagined someday owning the place. He met Jenna when they were ten-years-old, and his young heart fell hard for her, relishing every summer she came back. That is, until two years ago, when she broke his heart and never returned.
Uncle Walter proposes a challenge between the two, with the winner becoming the new owner of Misty Harbor. Now, there’s a real chance Cole could lose his heart and his home. Jenna isn’t sure which worries her more—a summer of rivalry or romance?

The Upgrade by Candice Toone
Moving on after college can be tough. Especially when former sorority president and dance team captain, Amanda Ford, takes a job at her alma mater. Her big plans to help host a study abroad tour to Peru and to launch a dance fitness program back on campus nearly come undone when she meets Spencer Elliott, an adorable undergrad who’d love to date the girl she used to be. She gives in to a final hurrah date, but regrets that choice when Spencer shows up at the study abroad orientation. Customs regulations, professional insecurities and social unrest combine to challenge Amanda’s developing professional prowess, often leaving her pitifully vulnerable to the unfortunate combination of an emerging sense of self, a handsome near-stranger, and a beautiful Peruvian beach.

Surfboards and Star Trek by Donea Lee Weaver
When Anna meets much-younger-looking Derek while on vacation at the beach-it’s not exactly love at first sight. How could a handsome surfer be interested in a divorcee like her? When she finds their age difference is nominal and that she and Derek share a love for all things Star Trek, she hopes love might blossom. But, long-distance relationships are tough. And when a waitress mistakes her for Derek’s mom, she starts to doubt the budding romance. Can a California surf-connoisseur and an older woman who sucks at all things water-sports find enough common ground to make a relationship work?

I always love anthology collections.  Having several stories from different authors keeps things interesting and new.  Sometimes I wish the stories were longer- but it is nice to have shorter stories that you can finish up when you just have a short time to read.

A beach setting for books is love for me!  I love the beach and I'm always longing to be there.  Since I can't get there easily in my real life, escaping there with a book is the next best thing!  :)

I really enjoyed all these books.  Each one had their own style and flavor.  They were fun to read and I was engaged and happy the whole time.  What more can you ask for?  This book was the perfect way to kick off summer!

I received a copy of this book in exchange for an honest review.