Fires of Invention (Mysteries of Cove # 1) by J. Scott Savage 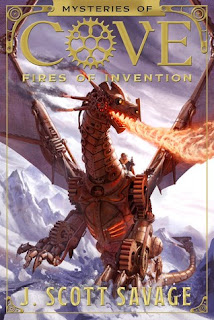 Trenton Colman is a creative thirteen-year-old boy with a knack for all things mechanical. But his talents are viewed with suspicion in Cove, a steam-powered city built inside a mountain. In Cove, creativity is a crime and “invention” is a curse word.

Kallista Babbage is a repair technician and daughter of the notorious Leo Babbage, whose father died in an explosion—an event the leaders of Cove point to as an example of the danger of creativity.

Working together, Trenton and Kallista learn that Leo Babbage was developing a secret project before he perished. Following clues he left behind, they begin to assemble a strange machine that is unlike anything they’ve ever seen before. They soon discover that what they are building may threaten every truth their city is founded on—and quite possibly their very lives.

I would classify this book as middle grade steampunk dystopian which is such an intriguing combination!  I know younger readers are going to love this series.  It has that appeal to both boys and girls which is really hard to do.

Can you imagine a city, fully functional and built inside of a mountain?  Powered by steam, the city of Cove is multi leveled and self sustaining.  It's people are kept under tight control though and told exactly what to do at all times.  Talk about stifling.

Trenton is a smart boy and unfortunately for him, creative.  Creativity is frowned upon in Cove and Trenton  is full of it.  Because of this, trouble follows Trenton everywhere.  Kallista and Trenton and two like minds and that means double trouble!  As they work together to piece together a puzzle left by Kallista's father, they run into all kinds of scrapes and adventures.

One thing I loved was the picture at the beginning of every chapter.  In the beginning it is just a faint drawing of a dragon, made up of mechanical parts.  As the chapters progress, so does the dragon.  The mechanical parts become well defined and darker.  It gave me the sense that something big was happening and coming together.  Maybe something that I knew that the characters didn't.

I enjoyed reading this book.  It wasn't silly or over the top as many middle grade books can be.  The world building was excellent as were the characters.  The cross appeal to both boys and girls makes this an excellent book to read aloud to younger children, I think.  Very fun!