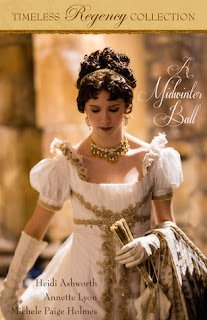 MUCH ADO ABOUT DANCING by Heidi Ashworth. Two years have passed since Lord Northrup declared his intentions for Miss Analisa Lloyd-Jones and forbade any other man to court her. Angry at the neglect, Analisa stopped reading his letters, never even breaking the seals. Tired of waiting, Analisa joins the house party at Mrs. Smith’s famous country home, determined to find a beau. When Lord Northrup unexpectedly joins the party, Analisa discovers she is no longer repulsed by the man who first laid claim to her hand.SWEETER THAN ANY DREAM by Annette Lyon. Olivia Wallington is firmly established as a spinster, but that doesn’t stop her from dreaming about the perfect man. Ever since her father’s death, Olivia has been forced into seclusion by her mother. When her brother and his wife come for a visit, they discover the extent to which she lives under their mother’s thumb. With their help, Olivia sneaks out to attend a local ball, where she meets Edward Blakemoore. For a few divine moments, all of her dreams seem possible. But even someone like Mr. Blakemoore would be hard pressed to get past Mrs. Wallington’s fortress of protection—or past Olivia’s pride.AN INVITATION TO DANCE by Michele Paige Holmes. Lady Ella has been isolated on her father’s estate since her mother’s death as her father travels the world. When Alex Darling arrives with a letter from her long-dead fiancé, and a demand that she travel to London for a series of engagements, Ella thinks her father instigated the strange demands and agrees. In London, she discovers the truth behind her fiancé’s death, and that new love might be possible in the arms of the most unexpected man.

A Midwinter Ball consists of three different regency stories, all novella length and each by a different author.  Regency romance is one of my favorite genres so I was excited to read this!  I love the pictures regency romances paint in my head- especially at the ball!

Sometimes when I read novellas I feel a bit disappointed because I feel like they were over too fast and I wanted more of the story.  These stories were all perfect though.  I felt like I knew the characters and had a firm beginning, middle and end.  They left me feeling satisfied in the end.  Romantic, sweet and sigh worthy.