A Player for Christmas: Book 4 The Last Play Series by Taylor Hart 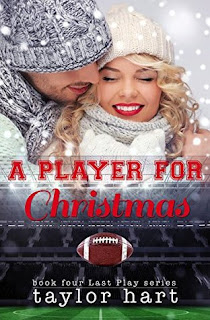 Brooks Stone, wide receiver for the Miami Surf, isn’t the type of guy to make dreams come true; he’s too busy dealing with a high ankle sprain and the anniversary of his wife’s death.

Callie Given, a cancer patient at Primary Children’s Hospital, only has one wish for Christmas—dinner with Brooks Stone. He flatly refuses, until Sam Dumont threatens to make sure the coaches bench him if he doesn’t comply.

Ana Given thought fighting for her daughter’s life was enough of a challenge. She never expected famous football player Brooks Stone to actually show up. If he was a friend of her ex-husband, he’s definitely not someone she wants hanging around her daughter. Good thing she sends him away. Too bad her daughter sees him before he can leave.

When Brooks and Ana find themselves on a quest to find Callie’s father, neither would have imagined getting on a plane together, going to a cage fight, or…kissing.

Brooks wonders how these two women have become everything to him in less than seventy-two hours. Now he has to make a decision—get what he wanted for Christmas or become the player he was always meant to be.

I've been reading this Last Play series from the beginning and I really do love it.  Each book revolves around a professional football player who starts out ornery and jaded in some way, for some reason, but that usually doesn't last too long.  In this case, all it takes for Brooks to come around is meeting Callie who is a cancer patient with one Christmas wish- to meet him.

There are lots of sparks and tension in this book.  The kissing gave me goosebumps!  I love how Brooks throws himself into helping Callie and Ana just like he would throw himself into a football game.  He's an all in, full on type of guy.

This was the perfect book to feed my romantic hankerings and put me in the Christmas spirit.  If you haven't read any of the books in this series, you really should.  Especially if you love clean romance.  This is easily one of my favorites.  Fun, flirty, clean, easy reading that leaves you with a smile.