Portrait of Lies by Clair M. Poulson + $25 and Book Giveaway 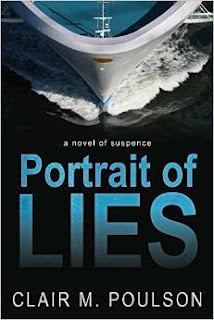 It was a robbery gone bad, or so they said. For Detective Trey Shotwell, the murder of his mother, a prominent artist, was the catalyst for setting aside his own artistic aspirations to pursue a career in law enforcement—despite the opposition of his father, also a famous painter. When he agrees to attend an art auction featuring his father's work, the cruise ship locale provides the relaxation that Trey needs—and when he meets stunning fellow passenger Ariah Stanton, the undeniable chemistry they share is an unexpected bonus.

But the tranquil voyage quickly turns into a nightmare at sea. The Shotwell paintings have disappeared, and amidst the chaotic hunt for the thief, a murderer is free to roam the halls of the ship. Ariah finds herself in the wrong place at the wrong time, and miraculously escapes the murderer—for now. But another victim is not so lucky...

The crime is eerily reminiscent of the death of Trey's mother so many years before. But this time, the young detective has the resources he needs to track the killer. As the pieces of the puzzle begin to come together, they paint the chilling picture of a sinister plot years in the making. In a manhunt that takes him from the high seas of the Pacific to the wilderness of Australia, Trey will stop at nothing to solve the crime and protect the woman he loves.

Portrait of Lies is suspense just like I like it- just enough to keep you interested and on the edge of your seat but not too scary.  Clair Poulsen is one of my favorite authors in the LDS suspense genre.  His books are clean and have a great flow to them.  I really enjoyed this one!

This book is primary set on a cruise ship and revolves around some paintings.  There is a whole cast of characters and I suspected them all.  Even though there were so many characters in this book I never felt as though I didn't know who was who.  I had a clear picture of each character in my head and they all came into the story in a way that was easy to remember.  That is always a huge thing in a book like this.

Trey is a character that is easy to root for.  He is strong yet kind.  He knows what he wants and works hard to get it.  Ariah is less of a standout in this book, more needy than anything but a good contrast to Trey.

This book is an LDS suspense.  The characters mention their religion and the book will say they talked about religious things but nothing is detailed or specific.  There are some violent things, murders and such things that are usually found in suspense novels.  Other than that, this book is squeaky clean- no swearing or sexual content.