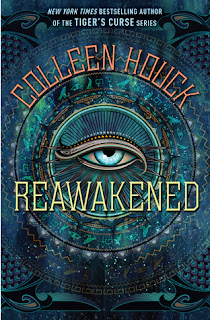 When seventeen-year-old Lilliana Young enters the Metropolitan Museum of Art one morning during spring break, the last thing she expects to find is a live Egyptian prince with godlike powers, who has been reawakened after a thousand years of mummification.

And she really can't imagine being chosen to aid him in an epic quest that will lead them across the globe to find his brothers and complete a grand ceremony that will save mankind.

But fate has taken hold of Lily, and she, along with her sun prince, Amon, must travel to the Valley of the Kings, raise his brothers, and stop an evil, shape-shifting god named Seth from taking over the world.

From New York Times bestselling author Colleen Houck comes an epic adventure about two star-crossed teens who must battle mythical forces and ancient curses on a journey with more twists and turns than the Nile itself.


Squeeeeeeeeee!  I cannot tell you how excited I was to get my hands on a review copy of this book.  Colleen Houck and the Tiger's Curse series are right at the top of my favorite list and when you see the beginning of a new series coming out by an author you love it's like Christmas day.  Yay!  I'll admit I did the happy dance for this book.

When you love an author and a series so much, it's equal parts excitement and trepidation starting a new series.  Will you love it as much?  Will it live up to all you are hoping for?  There are so many expectations.

I'm happy to say that I did really enjoy this book.  Was it better than Tiger's Curse?  I don't think so, but this is only the beginning of the series and I would expect that by the end, I will probably love it just as much.  It is definitely off to a grand start.

How would it be to discover a mummy coming back to life?  Freaky and creepy, I tell you.  That's what it would be.  I think Lily would agree.  At least at first.  Amon will grow on you though.  His quest will become your quest and you will have no choice but to be sucked into the world of good vs. evil in Egypt.  There is a scary cast of evil characters but an awesome cast of good guys as well.  It was so easy to be swept up in this finely crafted story.  And of course, true to Colleen Houck form, the ending leaves you pulling your hair out in frustration knowing you have to wait at least a year for the next installment.

So, this was an action packed, pushing you forward kind of book.  I could barely catch my breath.  It was awesome because I love being sucked into a book, not wanting to put it down because I just have to know what is going to happen next.  How will they get out of this mess?  My mind was filled with all sorts of magical and mystical things.  And best of all?  It was clean.  No swearing or sexual content to make me squirm.

My thanks to the publisher, Delacorte Press, for allowing me to read and review this book.  I sure feel like a lucky girl.  Reawakened releases on August 11th!