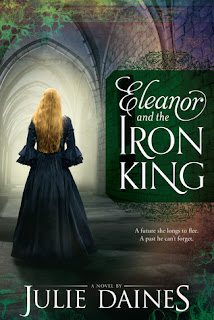 Eleanor de Lacy is forced into an arranged marriage with her father’s greatest enemy, Brac Goch, the Welsh king. All Eleanor knows of Brac is that he is a ruthless, war hungry man.

Eleanor arrives at the Welsh castle of Bryn Du already expecting the worst. When the ghost of Brac Goch’s first wife appears and warns her that the Welsh king is not to be trusted, all of Eleanor’s fears are confirmed.

As the countdown to her wedding day approaches, Eleanor must figure out who is lying, who is telling the truth, who is loyal, and who is the traitor--and most of all, if she can love an enemy king.

This book held a few surprises for me as far as genre goes.  I was expecting a historical fiction with some romance but I also got a bit of the dark magic, haunting ghost thing as well which added some flavor to the story.

Eleanor is an interesting character.  She has spent a lifetime being abused by her father which makes her distrustful and wary of others.  But, for some reason, she believes what her father tells her about everything.  Which is just crazy.  Why would you believe the person who hurts you the most?

Eleanor expects the worst from Brac Goch.  He is the enemy.  Even though he is nothing but kind to her.  She has grown up believing he is the worst of the worst though and when the ghost of Brac's first wife shows up with creepy messages in blood, Eleanor can't ignore them.  Eleanor is torn by what she believes and what she sees.  It makes for a bit of suspense and intrigue and it kept me wanting to read the whole book through.  I was caught up in the story and I was equally frustrated by and proud of Eleanor.  The pacing of the story was really good; the characters flawed but believable.  I really enjoyed this book!

Content:  Clean.  No swearing or sexual content.  There is dark magic and some violent scenes in regards to that.