The Calm After the Storm by Mya O'Malley 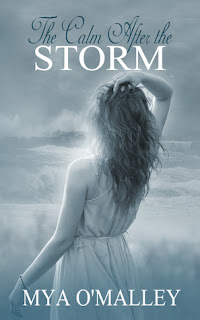 The storm of the century raged through the northeast, causing destruction and despair, millions were left without power and hope. Weeks later, countless people were still devastated by the destruction of Hurricane Sandy, Emma Riley among them.

Determined she didn’t need the help of a man, Emma was convinced that she could brave the aftermath of the storm on her own. That is, until Jake came into her life.

After having suffered heartbreak and embarrassment, Jake Mack, a utility foreman, volunteered to travel north from small town, Georgia to assist with the aftermath of the storm. Jake was decidedly done with women. But he didn’t count on meeting Emma or falling in love so quickly. Can he trust this woman or will his past get in the way and ruin the relationship with the one woman he truly loves?

I was immediately drawn into this book simply based on the setting and the events happening.  Emma and Jake meet because of a powerful hurricane that has left behind devastation.  Emma survived it and Jake is there to help people rebuild what was lost.

Emma and Jake meet and it's basically attraction at first sight.  They delve right into a physical relationship (sex but behind closed doors) without the friendship and trust any relationship needs to be strong.  I think this led to the crazy back and forth game that drove me nuts in this book.  One chapter they are together.  The next chapter they are not.  Then they are.  Then they are not.  It was so back and forth I wanted pull my hair out.

Jake definitely has a lot of drama in his life.  A LOT of drama.  Emma gets sucked into the drama by default.  This book for me was more plot driven than character driven.  While there were many "things" going on, I lacked the emotional pull to the characters.  I just couldn't connect with them.  But, I did like the basic plot and Jake's devotion to his daughter.  I just wish there had been less of the back and forth game between he and Emma.

Labels: Mya O'Malley, Romance, The Calm Before the Storm