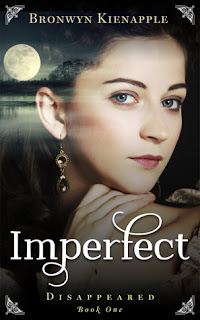 England, 1813. Lady Theodosia feels she has no choice but to marry a man she doesn't love. That is until she stumbles into a different universe — an astonishing, mystical forest inhabited by the Nextic, a peaceful people who live close to nature.

Ahuil is fiercely independent until he meets Theodosia. Cut off from his own people, he nurses a dark secret. But in Theodosia he sees someone he can trust ... and love.

As her visits to his universe become more frequent, Theodosia is convinced she's found paradise. But a great change is coming to Ahuil's world. Half-beings roam the ruins of an unknown civilization and a growing mist appears to be preparing to wipe out his people — forever.

Torn between her family and a profound love, Theodosia is haunted by a question she cannot shake — in the face of terrible danger, how much is she willing to risk for love?

Imperfect takes you on an incredible journey that spans Regency England and a fantasy world unlike any you've ever imagined. Embrace the power of love and the yearning to be known in this tale of an irresistible heroine and the man who loves her, despite everything.

This is a regency, time travel, fantasy romance.  All in one.  Crazy stuff, I'm telling you.  It was interesting to see how the author meshed all those genres together.

This book was on the shorter side, I thought.  It starts off a bit slow but it did pick up and it didn't take me long to read through it.  The end is a bit of a cliff hanger so it leaves you wanting more.

I thought this was a good book, mostly surface for me as my emotions never got involved, but I appreciated the creativity as the author is obviously trying to create something different from most books out there.