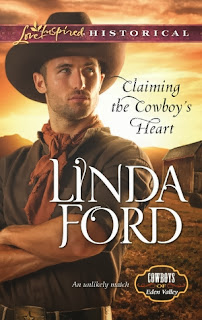 After witnessing her fiancé's murder, Jayne Gardiner won't let herself be caught on the wrong side of a gun again. But a disastrous first lesson in self-defense has left her with a wounded cowboy. She insists on nursing the handsome stranger back to health—whether he wants it or not!

Getting waylaid by a wild shot has definitely put a hitch in Seth Collins's step—and plans. Duty may call him home, but Seth can't resist lingering on Eden Valley Ranch to teach the English beauty to shoot. And when a shadowy figure from Jayne's past resurfaces, Seth's sudden urge to protect her has nothing to do with duty.

You gotta love when an inspirational romance novel starts out with the girl accidentally shooting the guy.  Ha!  Luckily Seth is pretty forgiving considering the hole in his leg.

Jayne sure does feel sorry about shooting poor, unsuspecting Seth.  All she really wants is to learn to shoot so she doesn't feel so helpless ever again.  Watching her fiance die was tough.  Lucky for her if she had to shoot someone, it was a handsome cowboy with a very strong sense of duty.  So strong it kind of gets in the way a bit.  But better that than an old, ugly stranger with half his teeth missing, right?  I'm such a sucker for handsome cowboy novels.

Some of my favorite things in the book were the frolicking deer, the mysterious key and the friends and family of Jayne.

I liked both Jayne and Seth a lot.  The friendship that grew between them was real and they helped each other work through the tough stuff.  This was a sweet story of growing love and softening hearts.  Harlequin's Inspirations line is a good one and I'm glad they let me read and review for them.

You can find Claiming the Cowboy's Heart at Amazon or the Harlequin site.
Posted by Getting Your Read On at 4:00 AM