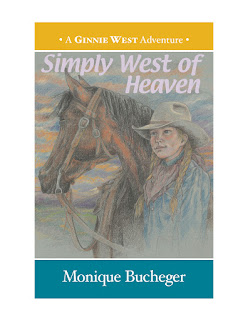 Twelve year-old Ginnie and her BFF, Tillie, schemed to get Ginnie’s widowed dad to fall in love with Tillie’s divorced mom. It worked. But before they could become ‘for real’ sisters, Ginnie stumbled across her dead mom’s journals. Which was totally awesome sauce… until her dad took them away and won’t tell her why. Now all their plans are starting to unravel.

If that’s not bad enough, Ginnie’s favorite uncle drops the mother of all bombshells and leaves her in a maze of uncertainty. While her head is still spinning from that news,  a blast from her late mother’s past shows up and makes Tillie goes nutburgers. Ginnie realizes her best friend has her own agenda and Tillie’s plans to merge their families may not be so innocent.
SIMPLY WEST OF HEAVEN is a contemporary MG novel that follows Ginnie West as she tries to make sense of one too many curve balls tossed her way in the most pivotal summer of her life.


This is my first Ginnie West Adventure book.  I haven't read any of the previous books in this series but I don't think it hurt at all.  I was able to easily settle in to this book without being confused.

To me, this book was like a soap opera from a child's point of view.  Ginnie's mom passed away when she was very little.  She is, naturally, very curious about her mother so when she finds some old journals written by her mother she is desperate to read them.  Ginnie's dad has other ideas though.  He doesn't want to deal with all the secrets the journals hold.  Meanwhile, Ginnie's uncle finds out he's a father and didn't know it, her aunt shows up to throw the whole family into an uproar, her best friend has a complete meltdown which stems from the abuse she endured from her father, her brother gets hurt, her aunt is getting married.  I'm telling you it's a family drama.

Ginnie is a determined little girl.  She is stubborn and impatient but she does care about other people.  She is right on the edge of child and growing up.  I really felt her desperation and need to know about her mother.  Luckily Ginnie has lots of people surrounding her that love her.  I guess that's the biggest message that I took away from this book.  Family is important.  No matter how that family comes together, blood bond or not.  The people that love you can help you work through life's challenges.

Simply West of Heaven was a good MG book with a contemporary setting that kids will be able to relate to.

Would you like an autographed, personalized copy? Visit Monique's page here to order:
http://moniquebucheger.blogspot.com/p/paypal-safer-easier-way-to-pay-online.html 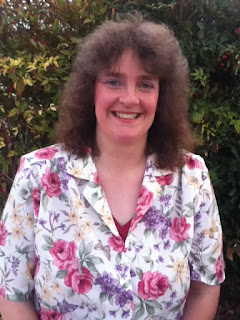 Monique Bucheger was born in Landstuhl, Germany to active duty Air Force parents. After watching her creative writing teacher's astronaut son lift off in the Space Shuttle Endeavor, she recalled a promise to her teacher to write the books only she could write. In January of 2011, her first book made it through the first 3 tiers of Amazon's National BreakThrough Novel Award Contest to the top 5%. In November of 2012 Mrs. Bucheger was offered a 3 book contract for her Ginnie West series. Book one: THE SECRET SISTERS CLUB: A Ginnie West Adventure was published March 8, 2012. Her second book: TROUBLE BLOWS WEST: A Ginnie West Adventure was published April 14, 2012.
Mrs. Bucheger has championed the cause of children as a foster parent to over 120 children and her books embrace and empower people on all sides of the child abuse issue.

a Rafflecopter giveaway
Posted by Getting Your Read On at 7:45 AM