Rise of the Fire Tamer Blog Tour: Review and $25 Giveaway 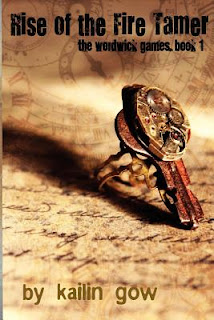 Rise of the Fire Tamer by Kailin Gow
After winning a contest for a popular game called Wordwick Games, five teens Gemma, Sparks, Rio, Kat, and Jack, are invited to stay at Wordwick Games inventor Henry Word's mysterious castle and play the newest level of Workwick Games. Little do they know, the castle is the doorway to a wondrous world call Anachronia where words can be used as weapons, power, and commodity. There is unrest in Anachronia, and if the five teens can follow the rules of Wordwick Games and prove to be the best player, one of them will be crowned Ruler of Anachronia.


There were many good things about this book.  I always appreciate a good middle grade book that contains no swearing.  This book was an adventure.  It started out a bit Charlie and the Chocolate Factory-ish when the kids get a special invitation to a mysterious castle to meet Henry Word.  That's about where that parallel ended though.  :)

The five teens invited to the castle are all so different.  Their personalities really came through in the book.  I could picture and hear them in my mind which is a great thing.

I loved the idea of using words as weapons or power.  Knowing smart words to use to your benefit is awesome.  I was really glad I was reading this book on my Kindle so I could instantly see the dictionary meanings of these words.  Some of them I didn't know!  This is a fun way to learn new words and I love the concept.  There was a glossary of words in the back of the book as well.

My biggest problem with this book is the editing.  It drove me a bit mad.  This book needs a full professional edit.  Or maybe two.

Overall a good book though.  I'm glad I was a part of this blog tour.  Check out this book trailer and the excerpt following.  Don't forget to enter the giveaway at the very end!

Gem recognized the voice instantly as that of Henry Word. After his online announcements, she was hardly going to forget. He must have come into the hallway through a side door. She turned to greet him with the others, expecting to look up into the already half-familiar face, and had to adjust the direction of her gaze when it turned out that Henry Word was sitting down.
He was sitting down because he was in a wheelchair.
It was quite a high tech wheelchair, obviously custom made and designed around Henry Word, but there was no escaping the fact that it was there. From the waist up, Mr. Word was dressed conservatively, even elegantly, in a suit and silk tie. From the waist down, his legs disappeared beneath a tartan blanket. They didn’t appear again on the other side.
“A small accident from my army days,” Henry word said, and Gem found herself wondering if he’d read her mind in the second it took to decide that the others probably looked just as surprised as she did. Gem realized that, in all the pictures she had seen of Henry Word either online or in magazines, not one had shown more than his head and shoulders.
Henry Word laughed then.
“I can see I’ve caught you all rather by surprise. Still, before I turn into the main topic of conversation, can I take a moment to welcome the five of you?’ his gaze flicked to each of them in turn, and Gem guessed that he was matching names to faces in his mind. “You are all here, of course, because you have turned out to be some of the biggest fans of my little game. Congratulations on that. For the next week, you’ll be staying in what I hope you’ll find to be extremely comfortable surroundings, and you’ll get the benefit of a very special surprise.”
“What surprise?” Rio asked from behind Gem. Henry Word chuckled again.
“Ah, Riordan Roberts, I take it? Well, there is nothing to be suspicious about. In fact, I think that as fans, you will all enjoy this particular surprise. I have simply decided to allow you access to the tenth level of my game while we are here.”
Gem felt her brow furrow.
“But Mr. Word, aren’t there only nine levels?”
“That’s true at the moment,” Henry Word answered. “Anachronia is rather new. You will be among the first to play it. Still, let’s not focus on that too much now, shall we? Chef has excelled himself in the Great Hall, and I’m sure you must all be hungry after your journeys.”

January 9th
Ever and Ever Sight - Review
Magical Manuscripts - Review

January 25th
Every Free Chance - Review
Fiction Prediction - Review
Posted by Getting Your Read On at 4:00 AM