Review: The Statistical Probability of Love at First Sight 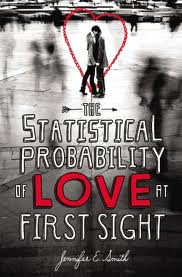 From Goodreads:
Today should be one of the worst days of seventeen-year-old Hadley Sullivan's life. She's stuck at JFK, late to her father's second wedding, which is taking place in London and involves a soon to be step-mother that Hadley's never even met. Then she meets the perfect boy in the airport's cramped waiting area. His name is Oliver, he's British, and he's in seat 18C. Hadley's in 18A.

Twists of fate and quirks of timing play out in this thoughtful novel about family connections, second chances and first loves. Set over a 24-hour-period, Hadley and Oliver's story will make you believe that true love finds you when you're least expecting it.

Okay, so I actually listened to this book on my Ipod, I didn't read it.  I'm not sure what sort of difference that made for me with this book.  This wasn't the book I was expecting it to be.  I thought it would be a fluffy, romantic, love story.  That is sort of what the title and synopsis leads you to believe, right?  Well, it does have some of that in it, but it was more than that.


To me, it was Hadley's life story, all bound up into 24 hours in her brain.  The trip Hadley is on to London is for her father's wedding to someone other than her mother.  Even though Hadley does meet a super smart and funny Oliver and they begin something on the plane ride, I felt like this book was more of an emotional journey for Hadley and her parents.  Hadley begins to reconcile her past, her feelings and the future.


Now, don't get me wrong, I really liked the book.  I found it touching and real.  It just wasn't what I was expecting.  I'm glad I gave this book a go.  I debated about it for awhile but it got lots of good reviews so I decided to take a chance.  :)


Content:  There is a few instances of mild swearing.
Posted by Getting Your Read On at 1:46 PM