Giveaway and Review for The Hollow of Mont Noir 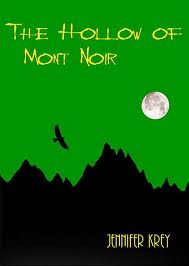 From Goodreads:   Allison Spencer was no stranger to the paranormal. An animal empath, she had the unique capacity to sense the feelings of animals around her - an ability she liked to call "Crittervision." She had never met anyone else with unusual powers and had gotten used to the fact that she was just an eccentric in a world full of normal people.

Allison lived an otherwise ordinary life and was looking forward to finishing high school along with her friends and her boyfriend in her hometown of Ocean City, Maryland. But when her older brother, Logan, suddenly disappeared from a small college town near the Adirondack Mountains in upstate New York, Allison's entire world was turned upside down.

Logan still hadn't been found after several months, so Allison's parents decided to move the family to the Hollow of Mont Noir, New York to look for him themselves. In addition to leaving behind her home and her friends and being dumped by her boyfriend, Allison suddenly had to deal with life in a small town, a strange creature that seemed to be stalking her, a new school full of cliques and cattiness, parents who were preoccupied with her missing brother, and an illogical fascination with an outcast boy who didn't talk to anyone at school.

As Allison settled into her new home, she began to realize that not everything - and everyone - was what they seemed. She soon learned of the existence of supernatural creatures living side-by-side with humans and was faced with a whole new set of questions - and some shocking answers - about herself and her family.

One of the best thing about being a book blogger is getting to read books I maybe otherwise wouldn't have known about or wouldn't have selected on my own.  I love reading.  I'm grateful to Jennifer Kray for sending me her book to read through.  She is so generously offering up an e-copy of her book here for a giveaway too.  :)  Thanks, Jennifer.


So, let me first say, I liked The Hollow of Mont Noir.  It was easy to read and get into.  Allison is an unusual girl with an unusual ability.  I really had to appreciate her kindness and desire to treat others with respect even when she didn't feel like it.  Allison is an easy character to like.


As I was reading I had a few "Twilight-ish moments".  Some things in this story were just very similar to Twilight.  I'm not saying that is good or bad, it just is.  The main make character reminded me of Edward because of his very proper way of speaking and his formal way of presenting himself.  He is untouchable and unapproachable at school.  Then we have the wolf aspect.  Allison has a visitor in her room at night and leaving early before the parents can catch wind.  Allison also gets it in her mind that she wants to be "turned" and seems determined to find out how the process happens and who can do it.  See what I mean?  A few Twilight-ish elements.


I found the Allison's whole family dynamic interesting.  When her brother goes missing, her parents do whatever they think it takes to search for their son.  It had me wondering what I would do in a similar situation.  Her parents have different ways of coping and I just found it interesting.  Allison sort of gets lost in their preoccupation with finding their son.


There are obviously a lot of unresolved issues in this book and I am really looking forward to reading the next book in this series to see where everything is going to go.  Even for all those unresolved issues though, I still felt like I had some resolution at the end of the book.  I didn't feel like I had been left hanging out off a cliff.  That was nice.


You can purchase this book at Amazon or Smashwords.


Jennifer Krey resides in New York State with her wonderful husband and two adorable little boys. She is a stay-at-home mom who enjoys swimming, cooking, and reading, and her favorite things include ice cream, sharks, and ebooks. Jennifer also likes to write in her free time.

If you'd like a chance to win this book, just enter in the rafflecopter below.  I really love these because you don't have to leave your information sitting out there for everyone to see.  This giveaway is open to all US and INT readers.  Giveaway will end April 10th, 2012.

Posted by Getting Your Read On at 2:14 PM