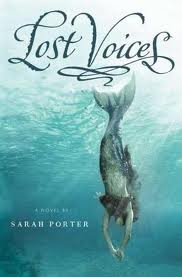 Life has not been easy for fourteen year old Luce.  Before her dad died she lived with him in a van and was constantly on the run.  One day Luce’s dad goes out to sea for work and never comes home.  Luce is left to live with her uncle who is a mean drunk.  Things reach a climax when Luce’s uncle tries to rape her and then leaves her on the dangerous cliffs of a small Alaskan town.   Luce fully expects to die when she drops into the freezing water below the cliffs but instead turns into a mermaid.  When Luce is taken in with a group of mermaids she feels a sense of true belonging and family but that sense of belonging is shattered when Luce realizes that these mermaids are driven to use their voices to destroy boats and kill humans.  Luce has a particularly beautiful voice and is capable of great power with it but Luce doesn’t want to kill humans.  As the other mermaids recognize Luce’s great skill, they put pressure on her to use it to their advantage.  Luce struggles between loyalty to her new family and her conscience.
This book was not at all what I was expecting it to be.  It was dark and sad.  I kept waiting for it to turn around, for hope to shine through but it never really did.  The whole mermaid vibe was disconcerting.  This book reminded me of a zombie movie, only with mermaids.  There was lots of death, bodies and blood.
Luce is a strong, smart character with that base need to find love and acceptance that drives her on.  I liked that even when she knew that base desire would be rejected, she still kept to her convictions.
This was not a great read for me, but I’m not really into the whole zombie scene, even when it’s mermaids.  About halfway through, I felt like I had the idea and knew how Luce felt.  Things just seemed to spin in one place without moving forward.   I like some happy in my books, some resolution that good conquers evil.  While I realize that this is the first book in a series and this book lays a foundation for the rest (which may eventually give me some of the happier stuff I’m looking for) I have to say that based on this book, I probably won’t pick up the next books.
Lost Voices will be released July of 2011.
Posted by Getting Your Read On at 9:20 AM