Stone (The Metcalfes #1) by Ronie Kendig 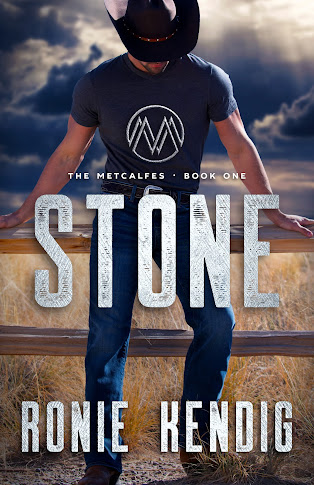 She cost him everything. Now, he’s forced to protect her.

Stone Metcalfe embodies the Metcalfe legacy—blue eyes, an unfair amount of good looks, and hardcore patriot-laced character. But a foolish lapse in judgment dismantles his name and career. Humiliated and furious, he retreats to his mountain lodge to hide from media hounds and eke out a new life. However, one phone call from an old Army buddy upends Stone’s best-laid plans.

Supermodel Brighton Buchanan had designers and men eating out of her hand until a terrible mistake trapped her in the soul-eating world of human trafficking. Years later, she is used by her captors to take down the best man she’s ever known. The man she loves. Hope lost, she’s unexpectedly freed—and thrown back into Stone’s life. Being forgiven is out of the question considering how much he hates her.

Believing danger and her are one wrong move away, Brighton will do anything to keep him from being ruined again—even if it means going back to that life. As everything is falling apart and threats mount against Brighton, Stone realizes forgiveness is the easy part. Protecting her—and his heart—is another story.

I loved so much about this book it is hard to know where to start!  Honestly, I didn't really read the blurb when I agreed to read this book or if I did, I forgot.  The latter is most likely.  Anyway, I agreed to read because this author is awesome.  I love the books I have read by her and I trusted that this time would be no different.  Because I didn't remember the blurb I was pleasantly surprised by the dedication this author showed in representing the world of human trafficking and Operation Underground Railroad.  This organization is amazing and if you don't know anything about them, I suggest you start learning.  It's so important to be aware, educated and supportive of this organization.  https://ourrescue.org/

I was so invested in this book.  It was fast paced, intense in both plot and emotions, and left me wanting more, more, more.  The characters were humanly flawed but so strong and sincere in their intentions.  I couldn't help but be caught up in their stories and their emotions.  It was SO good!  The backstory is revealed bit by bit, unfolding in the perfect way for me, as a reader to get to know them intimately while also keeping me firmly rooted in the drama of the present.  There is struggle, attraction, romance, danger and tension, leading to an intense, climactic ending.  I loved it!!

I wish I had the next book right now.  It's going to be hard waiting.

Content:  violence, peril, kissing, mention of faith and God, mention of sex trafficking and intimate relations with no details.