Knight from the Ashes (Crown and Crest #1) by Shari L. Tapscott, Jake Andrews 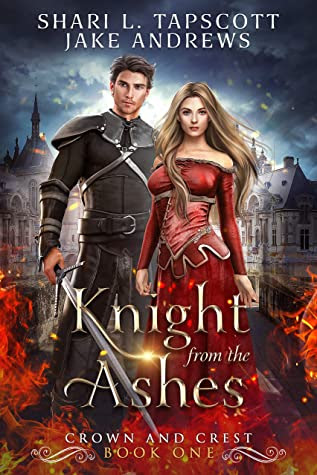 With single-minded determination, Henrik has worked toward gaining his knighthood so he may rise above the lowly station in which he was born. But just when the coveted position is within his grasp, he’s tasked with a mission that proves to be far more difficult than expected—secretly keeping a watchful eye on Lady Clover, a nobleman’s daughter with a sharp tongue and a knack for starting fights.

Clover, too, has one goal in life, and it has nothing to do with joining dull and dry Henrik on his supply run to the northern barracks. Why the blacksmith’s son is so determined to keep her close, she has no idea. They bicker and fight, and if Clover were to find a troll pit, she would certainly dump Henrik into it.

By the time they reach their destination, they are more than ready to be rid of each other. But something is amiss in the northern mountains. The usually quiet aynauths are on the move, with a bloodthirsty agenda of killing the peaceful Woodmoor elves.

Left with no choice but to team up, Henrik and Clover investigate the strange happenings and uncover a sinister plot against the crown. Together, they have a chance to save the kingdom—but only if they can keep from killing each other first…

It's a new start to a new series from one of my favorite authors!  And guess what?  She co-wrote this one with her husband.  That a new dynamic.

So I have some conflicting emotions here after finishing this book and that's mostly due to the cliffhanger ending.  I really don't love to be left hanging and I'm not a very patient person when it comes to waiting for books.  I get frustrated when there is no closure and yet, I keep coming back to these books and these authors because the stories are so good.  I just can't help it.

This book is all about the adventure.  Henrik is collecting people as he goes, it seems, and unwillingly, I might add.  But I really like this fun group of characters because they all have well defined personalities and are so endearing.  I think they are all growing on Henrik as well.  This book is really about the growing friendships between them and the growing plot.  There is no real romance and no kissing although Clover and Henrik definitely have an attraction to each other.  I call this the "laying the foundation" story and it's a good one.  I'll be coming back for more because, well, cliffhanger.  The next book cannot come out soon enough.