Holding On to Everything (Terms of Inheritance #2) by Dana LeCheminant 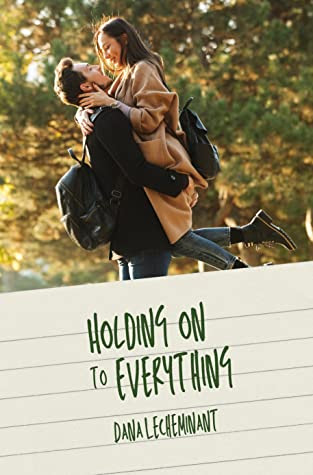 As CEO of a billion-dollar hotel company, Jace Hawthorne has everything he could ever want. But the only way to fulfill his father's dying wish is to give it all up, so he takes to the streets of Manhattan under the name of Tom, living with nothing. When he's hit by a cab, he can't help falling for the beautiful nurse who helps him.

Because Madeleine thinks he is someone else, Jace runs back to his old life before his lie hurts them both. But Madeleine shows up to his office asking for donations for her clinic and doesn’t recognize him, and Jace is torn between revealing who he is and keeping his distance; she has never been shy about her hatred of CEOs.

The closer Jace gets to Madeleine as he helps her find more donations, the more he falls for her and the less his old life seems to fit him. But telling her the truth will only break both their hearts, and he’s in too deep to walk away.

Trying to decide what he values most in life, Jace hopes he can find a way to keep his fancy life and the woman he loves. The chances of losing everything are growing with every passing day, but Jace is willing to risk it all for a shot at happiness.

This book doesn't release until Aug. 30th so I'm a little ahead of the game but this is when I could fit a review in so here we go!

First, this is the second book in the series and I didn't read the first book so I knew while reading it that I was missing part of a previous story but I didn't feel lost or anything.  I will have to go back and read that book though because I can tell it was a good one!

I really liked this story!  I liked the road Jace took as Tom, what he learned and how he eventually applied it to his life- his relationships and his business.  Madeleine was awesome too.  I loved her passion for helping people and I loved how hard she fought to keep that passion alive.  Jace and Madeleine are two fantastic, inspiring characters so it was easy to get caught up in their journey and story.  I guess what I loved most was Jace learning to really see people.  He started to make ways to connect to people and understand them and that felt like a message we all could use today.

I'll be interested to read the next story in this series!  I have a feeling it's going to be an angsty one because Jace's sister has a LOT of pent up anger, I think.  She's a feisty one!

Posted by Getting Your Read On at 8:36 AM

Labels: Clean Romance, Dana LeCheminant, Holding On to Everything, Terms of Inheritance Series