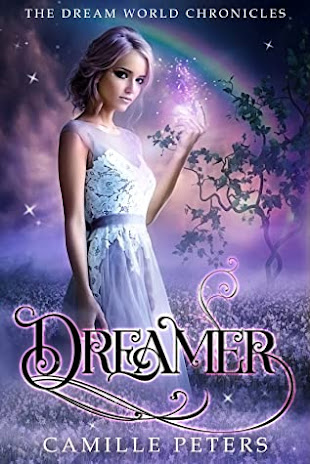 Eden has a secret: she has the ability to see and enter others’ dreams, a most inconvenient power when one is an outcast living in a magic-phobic village and yearning to fit in. When she accidentally exposes her powers, Eden discovers that her uncanny abilities connect her to the Dream World, home to the magical beings responsible for creating dreams, and the first place Eden has felt she truly belongs.

Standing in her way is the formidable Dream Council, which questions whether she should remain in their world. Unless Eden can prove she’s truly a Dreamer, she’ll lose all her magical powers and be forced to return to Earth. Proving herself turns out to be more difficult than she anticipated. When Eden is assigned to create dreams for a newborn mortal, her opponent—the talented Nightmare Darius—makes it his personal mission to uncover her secrets, which could result in her permanent banishment.

Eden struggles not only to outwit her foe, but also to prevent herself from falling in love with him, all while finding herself entangled in mysterious events as the Nightmare Realm begins to eclipse the Dream Realm, threatening not just her chances of remaining in her new home, but the balance of the universe itself. As Eden fights to fit into this world of dreams and magic, she finds herself on a journey of self-discovery that will take her down a path that forces her to confront an unknown darkness within herself, leading her to realize she’s not who she initially believed, nor does she belong where she thinks she does.

Happy new release to this book and this author!

First, I have to shout out my love for the cover of this book.  It so perfectly represents what is inside and I think it is beautiful.

I have to admit that fantasy books can be a bit hit or miss for me.  I thought the premise of this book sounded cool though so I wanted to try it out and I've read books by this author before and enjoyed them.  This book is a YA book, with a target age of 12-18.  That sounds about right.  The characters come across young.  Even the older ones.  So yeah, target range is spot on except this book is LONG.  Over 400 pages, which makes it not really great for most 12 year old's (and sometimes even adults like me!)  There was a LOT of description and the plot moves forward slowly.  If you love descriptive books, you will love this one.

The author clearly put a lot of thought and effort into this idea.  It is creative and imaginative.  I liked many parts of it.  I didn't have a lot of emotional investment in the characters but the story concept and the cover?  Two thumbs up.