Kind of a Big Deal by Shannon Hale 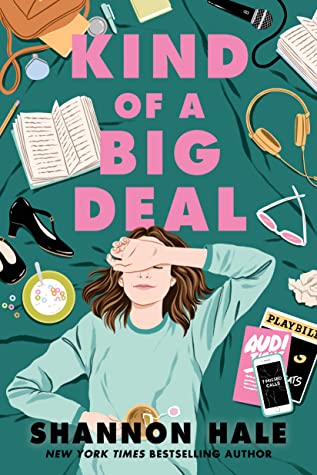 There's nothing worse than peaking in high school. Nobody knows that better than Josie Pie.

She was kind of a big deal—she dropped out of high school to be a star! But the bigger you are, the harder you fall. And Josie fell. Hard. Ouch. Broadway dream: dead.

Literally. She reads a book and suddenly she's inside it. And with each book, she’s a different character: a post-apocalyptic heroine, the lead in a YA rom-com, a 17th century wench in a corset.

It’s the perfect way to live out her fantasies. Book after book, Josie the failed star finds a new way to shine. But the longer she stays in a story, the harder it becomes to escape.

Will Josie find a story so good that she just stays forever?
* Goodreads * Amazon *
I was pretty excited a see a new book by Shannon Hale.  I've really loved so many of her earlier books and the premise for this book sounded intriguing.  Unfortunately, I didn't love this book quite as much as I had hoped.
Josie was a difficult character for me to connect with.  I didn't really like her so it made it hard to stay focused and really care about what was happening to her.  Her character did show growth by the end so that was good.  Josie definitely felt like a teenager so the author nailed that.  The little girl Josie was a nanny for was cute!  I think she was my favorite character in the book.
I will admit to doing a bit of skimming, especially when Josie becomes the character in the books she is reading.  I get what the author was trying to do and the purpose behind it, it just didn't click in with me how she intended, I think.  I really wanted to like this book but I just didn't.
- I received a complimentary copy of this book.  All opinions expressed are my own.
Posted by Getting Your Read On at 4:00 AM