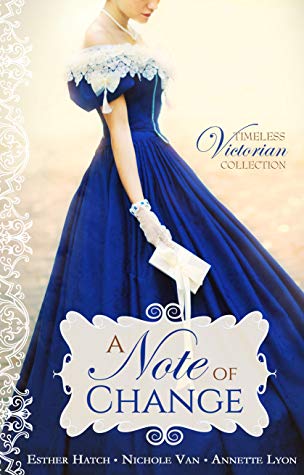 Can a single note can change a life, start a romance, or drive two people apart?

Waiting for the Post by Esther Hatch
Now that Harrison Chase has finally made his fortune as a working man, he will risk it all to save his factory workers from starvation. In the middle of his charge to reverse the Corn Laws, his housekeeper helpfully mails a letter she finds languishing amongst his things. A six-year-old love letter. With no other choice, he rushes back to his childhood home on Christine Stone’s estate. If he can’t get his hands on that letter before she does, Christine will discover what a pitiful and pretentious fool he had been. The one thing he hadn’t counted on was the mail being delayed. Now Harrison must decide which is worse—waiting with Christine as he not-so-slowly falls back in love with her, or leaving, knowing once she reads his letter he can never return.

A Ring of Gold by Nichole Van
Viola Brodure longs for something more from her life. So when that something more arrives in the form of a letter from the renowned Highland Poet, Ethan Penn-Leith, she seizes her chance. After all, Mr. Penn-Leith merits every swoon-worthy adjective Viola can muster. What woman wouldn’t want to be in her shoes? But after journeying to Scotland and meeting the poet himself, Viola faces a difficult question: What happens if you don’t want the thing you thought you did?

A Rose by Any Other Name by Annette LyonAs an orphan whose only home has been the Foundling Hospital, Rose is tasked to work in the fine houses of Bloomsbury. She knows her duty—take care of the family upstairs and never forget her place. But her traitorous heart won’t follow the rules, and she falls in love with Oliver Withey, a man far above her station. Though she feels like she’s found a home in Oliver’s arms, his mother has other plans for her oldest son—and marrying a servant isn’t one of them. She’ll do anything to keep Rose and Oliver apart, including making a devil’s bargain that ensures they’ll never see each other again. When a mysterious old woman appears, she seems to have answers to Rose’s past. Could those long-held secrets hold the key to the future with Oliver that Rose longs for?

Three great authors have contributed stories to this fun collection. They were all great but I think I loved Waiting for the Post best followed by A Ring of Gold.  Each story is romantic and so very sweet.  The characters were vivid and so easy to root for.  I enjoyed every single minute in this book.  It made my heart happy.

This book is on Kindle Unlimited.

- I received a complimentary copy of this book.  All opinions expressed are my own.
Posted by Getting Your Read On at 2:48 PM