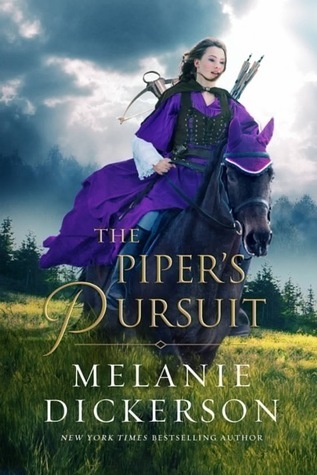 A plague of rats. Children going missing. A giant beast attacking just outside the walls of Hamlin. And one young woman determined to save her town.

Katerina’s stepfather, Hennek, is neither a good father nor a good husband, but he is the mayor of Hamlin. Could he somehow be causing the misfortunes that have befallen her beloved town? The evidence points to a beast of unusual size—a wolf, perhaps, or a large dog—killing people who venture too far from town. But does that explain the disappearance of so many children, many of whom seem to have gone missing from inside the town walls?

Steffan knows he must reconcile with his father, the Duke of Hagenheim, but he’s not sure he’s ready. In the meantime, he roams from town to town seeking adventure and reward. When he hears of a giant beast terrorizing the town of Hamlin and an equally giant reward that includes gold, money, and the mayor’s daughter in marriage, he heads to Hamlin. Steffan plans to kill the beast, rid the town of its rat infestation, and take the reward—everything except the girl in marriage. However, when he meets Katerina, he’s not so sure. Perhaps his plans need changing.

Katerina is hunting the Beast of Hamlin for herself, determined to win liberation from her conniving and controlling stepfather. When she finds one of the children who has been missing for many months, dirty and wandering around the woods, the mystery only seems to deepen. Katerina will have to team up with Steffan, the handsome but brash duke’s son who infuriates her—he’s the only one in town who isn’t controlled by the mayor. Danger dogs them from both man and beast. Can Katerina and Steffan stop the “Pied Piper” from stealing every last child from Hamlin? Or will their interference create an even worse fate?

I really love the cover for this book.  I think it's so pretty.

This story has excellent character growth, for Steffan especially.  He holds much guilt and remorse over past decisions and actions and is anxious to prove himself better.  His road to redemption is a satisfying one.  I love how hard he worked to be someone Katerina could trust and depend on.

Steffan and Katerina have quite the adventure, trying to solve the mystery of the missing children.  There is danger everywhere and working together proved to be better than working alone.   The author did an excellent job at creating a villain of Hennek.  My skin crawled right along with Katerina's every time he appeared.  I love the way Katerina stood tall and didn't cower to his vile words and actions.

I enjoyed the story but mostly the character growth.  The romance is gentle and very slow building- definitely not the prominent part of the story.  This one got a little long winded with the whole "confession" and I will admit to skimming over that part but overall there was much to enjoy here.

- I received a complimentary copy of this book.  All opinions expressed are my own.
Posted by Getting Your Read On at 10:04 AM