The Dating Charade by Melissa Ferguson 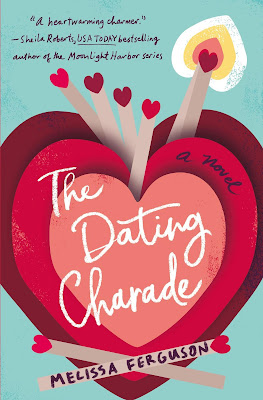 Just when you think you’ve met your match . . . the charade begins.
Cassie Everson is an expert at escaping bad first dates. And, after years of meeting, greeting, and running from the men who try to woo her, Cassie is almost ready to retire her hopes for a husband—and children—altogether.

But fate has other plans, and Cassie’s online dating profile catches the eye of firefighter Jett Bentley. In Jett’s memory, Cassie Everson is the unreachable girl-of-legend from their high school days. Nervously, he messages her, setting off a chain of events that forces a reluctant Cassie back into the dating game.

No one is more surprised than Cassie when her first date with Jett is a knockout. But when they both go home and find three children dropped in their laps—each—they independently decide to do the right and mature thing: hide the kids from each other while sorting it all out. What could go wrong?

Melissa Ferguson’s hilarious and warmhearted debut reminds us that love can come in very small packages—and that sometimes our best-laid plans aren’t nearly as rewarding and fun as the surprises that come our way.

There were so many bits I enjoyed in this book.  The main characters are genuinely good people so it was easy to like them and root for them.  The brief moments they were actually together and interacting were great but those were few and far between.  It was mostly about Cassie and Jett in their separate lives, dealing with unexpected events and struggles.  The story sometimes got a little long winded with the secondary characters (there were SO many of them!) and I will admit to some skimming.  😳  I guess I thought this was more of a romance than it turned out to be but it was a love story.  A love for children however they come to you and how that love makes a family.  Family isn't always about who you were born to- sometimes it's more about who you choose to love.  It was a feel good aspect of this book.

I thought the ending was cute and again, I loved the overall message of this book.  I just wish there were more moments of connection between the two main characters and less of the secondary characters.

- I received a complimentary copy of this book.  All opinions expressed are my own.
Posted by Getting Your Read On at 9:57 AM