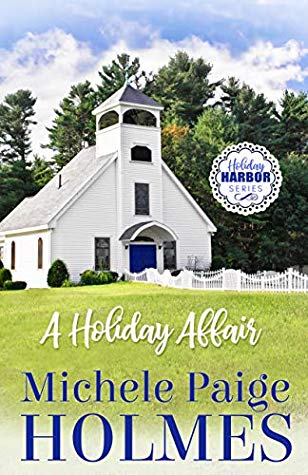 Welcome to Holiday, Alabama—population 765. In Holiday everyone knows their neighbors—and their business—a Mr. Roger’s look alike leads the local congregation Sunday mornings, and Annabelle, Breanna, and Carson have been best friends for over two decades.

On the eve of Anna and Carson’s wedding, Bree shares a secret and she and Carson embark on a journey that will break hearts and rock the town, where the biggest news is usually the size of the trout pulled from the harbor.

But the force of the river running through Holiday is nothing compared to that of its citizens, whether they’re holding a grudge, or standing behind someone. With both hearts and lives on the line, Breanna and Carson’s love story becomes a true Holiday affair.

Right up front I should say that this book may not be for everyone.  It all revolves around an affair between two people that hurt many people.  It could be a possible trigger for the many people who have suffered in a similar way.  I think most of us have either directly or indirectly experienced or seen the painful after effects of affairs.  This book in no way makes light of those feelings or the consequences of those actions.  I thought it was tastefully done.  The pages within this book are filled with emotion and struggles of all kinds.  I was completely invested in these characters and their journey.

This is a Christian book- forgiveness, repentance and God are spoken of often.  Carson's father is a preacher and he brings a steady, loving, gentle voice to the situations.

I wasn't sure I would like this book going into it and while the subject matter is difficult, the journey is a good one and the emotions are fleshed out well.  It drew me in and made me care.  There are always multiple sides to every story and I'm looking forward to the next book where Anna's story unfolds.

Content:  mention of an affair with no details, situations between a married couple, some innuendo, kissing