The Cumberland Bride (Daughters of the Mayflower #5) by Shannon McNear 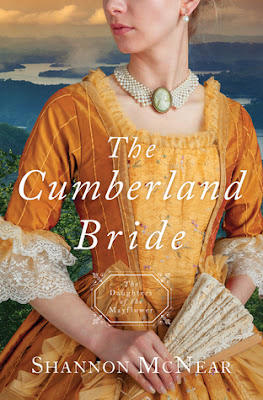 Love and Adventure Are Discovered on the Wilderness Road
In 1794, when Kate Gruener’s father is ready to move the family farther west into the wilderness to farm untouched land, Kate is eager to live out her own story of adventure like he did during the War for Independence and to see untamed lands. And she sets her sights on learning more about their scout, Thomas Bledsoe. Thomas’s job is to get settlers safely across the Kentucky Wilderness Road to their destination while keeping an ear open for news of Shawnee unrest. But naïve Kate’s inquisitive nature could put them both in the middle of a rising tide of conflict. Is there more to Thomas’s story than he is willing to tell? Is there an untapped courage in Kate that can thwart a coming disaster?

I really love historical fiction and I love the time and setting for this book.  It was such a time of turmoil and unrest as white settlers continued in their westward movement, pushing into the lands inhabited by the Shawnee and other Native American tribes.  Tensions were high and I could really feel that in this story.

This story has a really slow start and I was beginning to get impatient but I'm glad I stuck with it because once I reached about halfway through, things really began to pick up and I was completely engrossed.  I loved Thomas and his unique upbringing that gave an inside look into the Shawnee and their point of view.  There was such a feeling of adventure and danger throughout the whole story, especially in the last half.  Kate is an interesting character with her desire to document people's lives and stories.  She is brave, uncomplaining, and kind.  She compliments Thomas fantastically and it was awesome when he finally realized it.

I would give the first half of this book 3 stars, the last half 5 stars.  So, I guess that makes it a solid 4 stars from me.

Content:  some violence, mild peril, kissing.  This is a Christian fiction book, a bit heavier on the Christian elements.

Posted by Getting Your Read On at 8:46 AM