Elodie of the Sea (Eldentimber #5) by Shari L. Tapscott 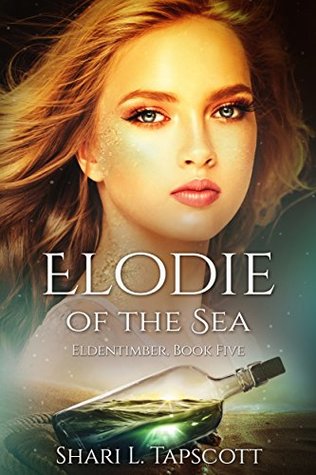 He's a king who gave up on love. She's a girl with no memory.

An entire ocean is keeping them apart.
Eight years have passed since the marriage tournament that decided the fate of Princess Pippa of Lauramore and strengthened alliances between the kingdoms of Elden. The competitors have moved on with their lives. Some have found adventure; some have found love.

Prince Bran of Triblue, however, has put his life on hold, preparing for his father's crown.

Two days before Bran's winter coronation, just when the prince cannot afford distractions, a girl washes onto the Triblue shore. She has no memory of her past life, no clue who she is or where she belongs—nothing but a ring on her finger and a peculiar marking on her cheek.

And the newly crowned king has more than a mysterious girl to worry about. The sea has become unpredictable. Storms claim ships in the dead of night, and sailors return with horrifying stories of monsters from the deep. It soon becomes clear the girl and the bizarre events are connected.

The girl came from the sea... and the sea wants her back.

But Bran isn't willing to give her or his kingdom up without a fight, even if it means he must request help from every corner of Elden.

* Amazon * Goodreads *
I was so, so happy to read this story for a couple reasons.  One, I love this series.  It's one of my favorite.  Two, I have been waiting for Bran (who I love) to get his happy ever after.  He's been around since book one and it's about time.
As with all the books in this series, this book has adventure, light romance and a touch of mystery.   All characters from the previous books made an appearance in this book and it was so fun- like a family reunion!  Each book can stand alone and don't necessarily have to be read in order, but you will probably enjoy this series more if you do.
Elodie is from the sea.  She has some mermaid like qualities with some creative twists.  My imagination was sparked, filling my mind with visions of far off lands and magical creatures.  The story kept a good pace and I was completely invested from beginning to end.
I love this series.  It's great for YA and adults alike.  It's clean (no swearing or sexual situations) which I also love.
Content:  some violence, mild peril
- I received a complimentary copy of this book from the author.  All opinions expressed are my own.

Posted by Getting Your Read On at 9:11 AM