Prancing Around With Sleeping Beauty (Storybook Valley) by Stacy Juba 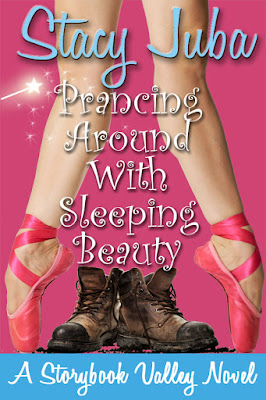 This Sleeping Beauty isn’t sure she wants to wake up…

Dance instructor Rory Callahan likes to play it safe. When she meets Kyle, he’s impulsive, persistent, and her exact opposite. He’s pushing her to tango way past her comfort zone and keeping Rory on her toes more than twenty years of dance teachers ever had.

Unfortunately, he’s the grandson of her family’s archrival and she doesn’t want to disappoint them. After all, her parents imagine her as a proper princess - hence her namesake Aurora, AKA Sleeping Beauty. Complicating matters, Rory’s also dealing with a surgeon boyfriend who’s perfect for her (sort of), an obnoxious boss, and desperate dance moms. Kyle wants to change her whole life, but Rory doesn’t like the stakes. After all, princesses are the ones who get the happy endings. . .aren’t they?

Happy release day to this new book by Stacy Juba!  This is the second book in this Storybrook Valley series but these books can stand alone and do not need to be read in any particular order.

I loved the cute first meet between Rory and Kyle.  It set the tone for the whole relationship.  Kyle was fantastic.  Determined, supportive, smart.  Rory has a kind heart and thinks about others but has some trouble when it comes to herself and what she wants.  She knows she isn't happy where she is in life but doesn't really have the confidence or follow through to stand up and go for what she really wants.  Even though Rory was frustrating at times, I appreciated her small baby steps toward making changes happen.  It was surely a hallelujah moment when Rory started to take some initiative and stand up for what she wanted.

There were a lot of extra curricular characters in this book, who eventually start feeling familiar but most of the time felt like too much and too many.  I felt like there were a few scenes involving those perimeter people that could have been cut out without really effecting the story.

Overall though, this was a fun book.  I love the setting in a fairy tale park and how the characters are loosely based on fairy tale characters.  It had a light feel to it which is the perfect diversion from those weightier feels of real life.

-I received a complimentary copy of this book from the author.  All opinions expressed are my own.

Twilight had descended over the strip mall which also contained a pizza place, children’s art studio, New Age shop, bakery, and a consignment store with identical brick facades. A long sidewalk connected the storefronts. Rory’s phone chirped and she scanned a text as she strolled through the parking lot. A message from her older brother Jake, who lived in Maine.

Happy 25th. What new rose crap did you get this year?

Instead of making her chuckle, his joke elicited a sigh. She missed Jake and his toddler Quinn, but he never came home anymore thanks to a stupid fight with their parents. They went ballistic after he got a girl pregnant and accused him of ruining his life. Jake and the mother broke up, not surprising since she was a total flake, but he got an apartment a couple blocks away from her to be near his daughter. His absence meant he couldn’t take over the theme park, leaving room for Dylan to step forward.

Heading toward her car, she replied: Don’t know yet. I’m on my—

Augh! Rory stumbled over something and toppled to the ground, her phone sailing through the air. Her right hand slammed against the pavement, and pain seared through her. Sitting up, she glared at the object that had blocked her path. A spiky creature in a plastic carrier glared back at her.

Rory blinked. She could accept a black cat crossing her path, but she owed her unceremonious spill to a needle-infested rodent?

“Who leaves a porcupine in the middle of the parking lot?” she demanded.

“Who trips over a huge animal carrier? Oh, right, someone who’s texting while walking.” A brown-haired guy in a khaki zookeeper uniform and boots loomed over her. She stiffened at his words until she noticed the dimples sprinkled with cinnamon freckles. He wasn’t mad, just amused. “And it’s not a porcupine. It’s a hedgehog.”

“What’s the difference? It was still in the middle of the parking lot.”

He crouched beside her. “For starters, hedgehogs have shorter quills that can’t easily come off their bodies, while a porcupine’s quills can easily detach themselves. On average a hedgehog has 7,000 quills while a porcupine has approximately 30,000. And a porcupine can grow to triple the size, between 25-and-36 inches.”

“It was a rhetorical question.” Rory risked a glance at her throbbing hand and winced. Blood dripped down her finger.

Mr. Porcupine Expert disappeared into a green van so garish, it almost distracted Rory from her pain. Painted animal heads peered out of big circles and orange letters proclaimed the monstrosity a Zoo Mobile—with paw prints forming the double ‘o’ in zoo. It wouldn’t surprise Rory if a white rabbit in a waistcoat popped out from the Day-Glo monstrosity, muttering about being late . . . for a tea party at her house using Wendy’s bumpy placemats. She groaned, deciphering the smaller words beneath the paw prints. ‘Duke’s Animal World.’

She’d always considered her family’s rivalry with Duke Thorne a bit ridiculous, but now Rory related to her granddad’s agitation. Thanks to sprawling over one of Duke’s stupid hedgehogs, she might have sprained her finger.

Shifting position, Rory glowered through the cage at the spiky black ball that had caused all the trouble. It huffed and puffed, quills poking outward, a breathing pincushion. My . . . she hadn’t realized hedgehogs had such tiny eyes. And what a cute button nose. This little guy—Turbo?—seemed skittish.

“He’ll be okay.” The dimpled zookeeper reappeared with her cell phone, along with a toolbox-sized red first aid kit. He unlatched the kit, opened a box of gauze pads, and bent beside her. “Let’s apply pressure to stop the bleeding.”

“I can do it.” Rory squashed the pad against the cut, her cheeks heating, whether from his boyish good looks, or the mortification of falling over a hedgehog, she didn’t know. She hoped he couldn’t detect her blush under the lampposts’ dim glow. She rested her wrist on her knee. “What are you and Turbo doing here, anyway?”

“The art studio had a zoo night. The kids decorated animal statues and then I did a presentation. I was just about to load my last animal, Turbo, into the van when you went flying.” He jerked his thumb toward the Zoo Mobile. “I’ve also got a red-eyed tree frog, bearded dragon, chinchilla, and domestic rabbit.”

“Is it a white rabbit?” Rory muttered.

Mr. Porcupine Expert elevated a brow. “Not this time. What’s your story? What were you doing here?”

“I’m an instructor at the dance studio. We were having an open house. I got a text, and apparently, I wasn’t watching where I was going.” Rory battled the temptation to peek under the gauze.

“Let me get this straight. You’re a dancer? I thought dancers were graceful.” His brown eyes crinkled with amusement. Their shade reminded her of a caramel latte, warm and inviting.

“I am graceful! This was an isolated incident.”

“How about I make it up to you with free zoo tickets? You can come meet Turbo’s parents. I’m sure they’ll forgive you if I explain that you’re a dancer with two left feet.”

He wore such a deadpan expression that Rory almost laughed. His dry comic delivery must enliven his presentations. Her grandmother Lois, Storybook Valley’s self-appointed entertainment director, would remark that Kyle had charisma.

Rory might enjoy touring the zoo with him, but her granddad would lock her in with the lions if she ventured onto his rival’s property. Growing up, she had never been allowed to visit Duke’s. “Thanks, but that’s okay. As I was telling Turbo here, it was my fault. I should have been more aware of my surroundings.”

She peered into the cage. Was it her imagination, or did Turbo look calmer now in Kyle’s presence? His quills had relaxed, laying down and pointing toward the back.

Kyle picked up the animal carrier and straightened to his full height. “How about I show you my passengers while you’re applying pressure? The least I can do is keep you entertained during your misery.”

After a hesitation, Rory climbed to her feet and trailed him to the Zoo Mobile. With her left hand, she finished a clumsily misspelled text to Jake, omitting mention of the accident. Otherwise, her brothers would ask her for the next month if she had tripped over any hedgehogs lately.

She leaned against the van as Kyle slid the bearded dragon’s carrier out the side door and positioned Turbo’s cage in its place. Over the next ten minutes, he explained how many bearded dragon species existed (nine) and what they ate (insects). If Rory ever appeared on a TV game show, she hoped they quizzed her on bearded dragons, porcupines, and hedgehogs.

Kyle discussed animals the same way Brad talked about robotic-assisted surgery. She wondered if Kyle had a college degree. Her guess was no. After all, how much schooling did it take to drive a Zoo Mobile? Once you memorized the spiel and learned how to care for the animals, what else was there to learn? As an employee that far down the company ladder, Kyle probably wasn’t aware of the Callahan feud.

After the bearded dragon lecture, Rory washed her cut and rubbed in bacitracin ointment. Kyle unwrapped a large Band-Aid, but instead of extending it to her, he pressed the patch over her skin. As their fingers touched, a shivery sensation whispered down Rory’s spine.

I am not attracted to the zoo guy.