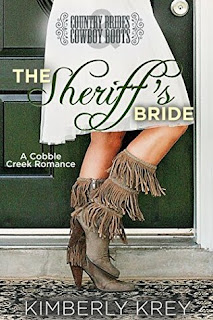 Trent Lockheart might be the new sheriff in town, but he can’t stop Jessie Jean from stealing his heart.

Sheriff Trent Lockheart knew he’d be in for a challenge when he moved from the big city and a large police force to the small Wyoming town of Cobble Creek. But at least he’d be able to stick to his bachelor ways without temptation. So he thought. Cobble Creek isn’t overflowing with young, single ladies, but Jessie Jean—the gorgeous brunette who runs the Country Quilt Inn—proves more tempting than any woman he’s known.

Jessie doesn’t care much for the new sheriff in town. After an explosive first meeting that almost ends in Jessie’s arrest, she’s even more determined to plan on dinner for one for the rest of her life. Sure, the new sheriff is seriously attractive, and after a second, much less dangerous run-in, he might not be that bad, but Jessie has no plan to marry, date, or even let a man into her life. Still, as the days pass, Trent’s surprising charm works past Jessie’s determination, and she finds promise in their budding relationship.

After opening up about the difficulties in her past, Jessie finds that Trent is guarding a dark tragedy of his own, one that might threaten their chance at a future together.

How cute is this cover?  I just love it!  And I love author Kimberly Krey.  She is so good at writing characters I end up caring about and sparky scenes with witty banter.

Trent and Jessie meet in a less than ideal way.  They start out on the wrong foot- completely misjudging each other.  It happens though.  We make judgments based on what limited knowledge we have and once we get more of the story, we usually understand each other better.  It's the same with Trent and Jessie.  That spark of attraction was there from the beginning and it grows as they get to know more about each other.  The misunderstanding and early judgments fall away as a friendship and respect take root.

I loved the arc of this story- how it led me so easily from one emotion to the next.  This book was so easy to fall into with a great cast of characters and a strong feeling of community.  I really enjoyed it!

- I received a copy of this book from the author.  All opinions expressed are my own.