The Spider and the Sparrow by A.L. Sowards + $25 and Book Giveaway 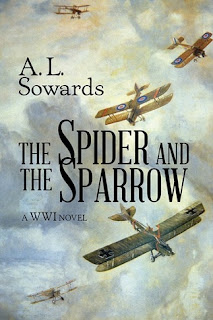 May 1915. After tragedy strikes during the Second Battle of Artois, Frenchman Julian Olivier will do anything to get out of the trenches. So when British Intelligence recruits him to spy behind enemy lines, he jumps at the opportunity. Just before he begins, however, he has a chance encounter with a young French woman who leaves his heart marked for the remainder of the war—even if he doesn’t know her name.

Warren Flynn is a Canadian airborne hero, and dogfights with the Germans are all in a day’s work. Second only to his love of flying is his fascination with Claire Donovan, the daughter of an American munitions manufacturer living in Paris. Warren flies Julian into Germany and soon receives orders to post the Allies’ newest operative—an attractive peasant woman named Evette—in Claire’s home.

As a dangerous ring of spies and saboteurs threatens to turn the war against the Allies, Julian discovers goodness in his enemies’ hearts. But even if he survives, will he ever be reunited with the woman whose memory he can’t erase? Will Warren survive the war, and will Evette unearth the infiltrator in her own territory before it’s too late?

Historical fiction is one of my favorite genres.  I love when stories are based on real events in history and take me to a place I've never been before.  I think it's so important to remember events like WWII and the people who fought and lost so much.  It was such a terrible time in history- so much suffering.

This book brings in characters from several countries and follows them in their separate plights that eventually all link together.  It incorporates the ground battles, the air men and their dog fights, and the spies.  The author does a fantastic job of making the characters so human and real- on all sides of the war.

I wouldn't say this book is a desperate page turner as the story progresses in a more gentle, fluid way.  Things develop slowly but I was never bored or feeling impatient.  The people and places were set up vividly in my mind and I enjoyed the gradual coming together of the events and characters.