Shenandoah: Daughter of the Stars (A Civil War Story Book 3) 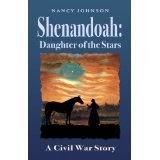 During the turbulent years of the Civil War, three young people struggle to follow their dreams as the war devastates their homeland and their way of life in the Shenandoah Valley of Virginia.

Hannah Yeager works hard on her family’s farm and teaches young children in a nearby school. She and her parents remain loyal to the Union. Secretly her fourteen-year-old heart thrills to romantic literature. She dreams that someday she will find a true love. When she does, he is a handsome Confederate colonel.

The strong female character of Hannah will appeal to girls who often see the Civil War as all about the boys. Hannah is empowered by “The Crazy Man” who lives in nearby caves. She learns from him that she can do what she must do.

Hannah’s thirteen-year-old brother, Willy, is spirited and headstrong. He rebels against his family’s values and seeks adventure by joining an outlaw raider band, terrorizing the Union Army.

Charlie Richison is a cadet at the Virginia Military Institute. He dreams of bringing honor to the Confederacy, to his family, and to himself. He joins other VMI cadets to fight against the Union Army in the Battle of New Market.

Shenandoah, Daughter of the Stars, presents the beauty of the valley and the devastation brought by the war. It shows the effect of the Reconstruction years which follow the war. It presents real people, General George Armstrong Custer, General “Stonewall” Jackson, General John Breckinridge and shows their effect on the lives of valley residents.

This is the second MG Historical Fiction book set during the Civil War that I've read in the past couple weeks.  That's just the way things lined up I guess, but when that happens and I read books similar in genre I can't help but compare them to each other.

This is the third book in a series, which I didn't realize when I first started reading but if there was more before, I didn't feel like I missed out on anything.  I liked that real historical figures were represented in the book which helped give the book a more authentic feel.  I didn't really feel a connection to the characters and that could be because I haven't read the previous books but this book seemed to be more plot driven with less character development.  My emotions were never invested in the characters but I did enjoy the story.  It brought a real family element to the harsh realities of war.

I lived in Virginia for a couple years and many of the places and people mentioned are very much a part of the whole essence of that area.  I have visited many battle fields and museums there.  My dad is a history buff and we went on a "Mosby" tour in Warrenton and surrounding areas.  It was so interesting.

Books like this are good for younger kids to read, I think.  It brings a human side to a war they only scratch the surface of in school.

You can purchase Shenandoah:  Daughter of the Stars at Amazon.

Nancy Johnson is a former teacher and the author of two other nonfiction books, "My Brothers' Keeper" and "A Sweet-Sounding Place," also about young people during the Civil War. She lives in Encinitas, California.  Visit her at www.nancy-johnson.com.
Posted by Getting Your Read On at 4:00 AM