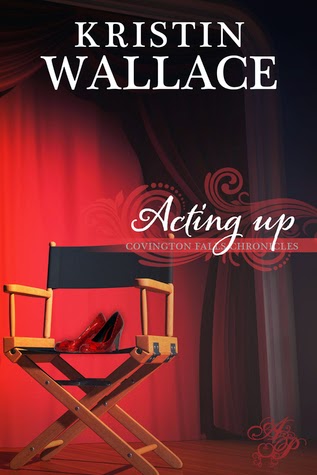 Addison Covington is the reigning Ice Queen of television. Until her producer husband falls in love with her on-screen daughter and a well-placed punch on national television casts her as the wicked ex-wife. Fired and disgraced, she escapes to Covington Falls, the idyllic Southern town where she found comfort in a time of turmoil as a teenager.

Life is constantly on the brink of chaos for widower Ethan Thomas. Being a single father is one challenge. As a high school principal he also has to deal with hundreds of students and their interfering parents. Now, he’s short one drama teacher and if he doesn’t find a replacement to direct the spring musical he’s going to have a riot on his hands. His childhood neighbor, Addison Covington, could be an answer to prayer. Or one more complication he can’t afford.

Before Addison can say “Casting Call” she's drafted to direct the high school musical. Soon she’d dealing with some off-key caterwauling, a bitter stepson showing up on her doorstep, and the boy-next-door turned sexiest high school principal she's ever met. One thing Addison and Ethan agree on is that there’s no room in their lives for romance. He’s got too much at stake, and she needs to reclaim her former glory in Hollywood. In the end, these two lost souls will choreograph a happy ending with the help of Grace, Love and a Curtain Call.

This was a sweet Christian fiction book and such a fun read.  I enjoyed the humor (often sarcastic by Addison) which put a smile on my face in many occasions.

Addison is having a tough go of things.  Her childhood was less than easy but left her with a determination to be something- to make something of herself.  And she does- as an actress in a hit TV show.  Her stardom teeters on the brink when things fall apart with her well known producer husband and Addison becomes the center of an embarrassing fit of emotion.

Addison is an imperfect character.  She has a lot of emotional baggage.  She makes mistakes.  But the grand thing about Addison is that she keeps trying.  There is no giving up or giving in.  I love the fighter spirit that trumps the hurtful and nasty things that keep happening to her.  The softer side is there and I love when it emerges for everyone to see.

Addison and Ethan together is sparkly.  Or, full of sparks.  Definite sparks.  Ethan is fighting his own demons and struggling to fight his attraction to Addsion who is the woman to finally get him feeling like a man again.  You gotta love that.

I read through this book fast.  It was one I had a hard time putting down because I love romantic tension.  There are some very Christian moments to this book but it was "clean" and I always appreciate a clean romance!  I'll be looking for more by this author and more in this series.

You can purchase this book at Amazon.  My thanks to Astraea Press for allowing me to read and review this book for them.
Posted by Getting Your Read On at 4:00 AM