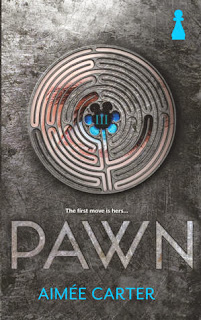 YOU CAN BE A VII. IF YOU GIVE UP EVERYTHING.

For Kitty Doe, it seems like an easy choice. She can either spend her life as a III in misery, looked down upon by the higher ranks and forced to leave the people she loves, or she can become a VII and join the most powerful family in the country.

If she says yes, Kitty will be Masked—surgically transformed into Lila Hart, the Prime Minister's niece, who died under mysterious circumstances. As a member of the Hart family, she will be famous. She will be adored. And for the first time, she will matter.

There's only one catch. She must also stop the rebellion that Lila secretly fostered, the same one that got her killed …and one Kitty believes in. Faced with threats, conspiracies and a life that's not her own, she must decide which path to choose—and learn how to become more than a pawn in a twisted game she's only beginning to understand.

This was a book I just didn't want to put down.  It was so interesting and compelling.  And a little bit freaky too.  Yikers.

Society ranking.  It always has been, it always will be.  I don't think that will ever change. Pawn gives ranking a whole new meaning though.  Little twists keep coming in to play that kept me, as a reader, on my toes.  I liked that.  There are a lot of characters in this book but Aimee Carter does a great job of introducing them in a way that I never felt overwhelmed.  They are all very distinct and real in my head.  Maybe too real!

I really like Kitty.  She is strong and capable even though she thinks she isn't.  She is super smart but has a learning disability that is forever making her feel less than she truly is.  As Kitty learns through acting as Lila, she realizes that she has to do something for the people and the cause she believes in but she is caught in a scary and deadly game.  Very deadly.  The Hart family is twisted and will stop at nothing to keep power to themselves.

Content:  There is some talk of sex and a situation where a girl decides to sell herself as a prostitute to make money.  There is some graphic violence and mild swearing.

PAWN will be released on November 26th.  What an awful long wait it will be for the next book.  Which I will absolutely be reading.

You can pre-order this book at Amazon in print or e-book.

My thanks to Harlequin Teen for allowing me to read and review this book for them.