The Sun, The Moon and Maybe the Trains by Rodney Jones + giveaways! 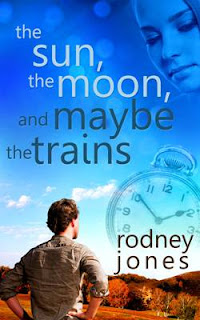 What would it take to convince you that the woods you just left is a hundred and forty-four years
distant from the one you entered?

Ten years have passed since the Civil War broke up John Bartley’s family. Living with his aunt and uncle in the tiny village of Greendale, Vermont, isn’t filled with excitement for a seventeen year-old.

Fortunately, he chances upon the outspoken Tess McKinnon. To earn her trust, he must first convince her that he is neither a lunatic nor a liar. The proof he needs is buried at the end of a mountain road, where the ruins of Greendale lie just beneath a layer of dead leaves and moss.

What became of his home? Why is there no record of its existence?

There is just something about time travel books, right?  I am drawn to them like a bee to honey.  Would it be cool to time travel?  I'm still not too sure, but it's such an interesting concept to read about.

Poor John stumbles a hundred and fifty years into the future.  Imagine his shock when he sees cars, electricity, cell phones and indoor plumbing!  He also finds Tess, who just may be more shocking than the cars and everything else combined.

I honestly didn't care too much for Tess.  I thought she was mean, making so much fun at John's expense.  She did try to help him so she wasn't all mean but she was certainly pretty into herself.  It was nice to see her taken down a notch or two when she runs into some time travel trouble herself.

I thought John was a great character.  As his ideas and morals collide with the future, he remains true to himself.  He is kind and generous with impeccable manners.  I liked him a lot.

Overall I enjoyed the story.  The ending third of the book had a bit more action and excitement and the ending was good, although I'm still not sold on Tess.

As for content, there was swearing and quite a bit of profanity (God, Jesus, Lord used as an exclamation).

Here is an excerpt from chapter one of The Sun, The Moon and Maybe the Trains:

I’d spent the first day of July, eighteen seventy-five, bouncing along behind my uncle’s two horses, driving a wagon of bagged flour and grist up over the mountain to Wallingford and then into Rutland. It’d often happen that farmers bringing their grain to my uncle for milling would have no other means to pay than a percentage of their crop. Whenever that percentage added up to a wagonload, I’d be employed to make a delivery to Jacobson’s General. But more and more, the farmers were giving up on grain and turning to sheep. It seemed like nothing was regular anymore, except for the sun, the moon, and maybe the trains.


The following morning, after lying there in the wagon listening to Rutland wake up, then getting up and going across the street to watch the seven-fifteen from Burlington arrive, I started home. Bright, cumbersome clouds lumbered overhead, small patches of blue setting one apart from the other; it looked as though it’d be a fine drive. About four miles before Greendale, at a level spot just beyond the last ridge, I stopped to give the horses a rest. I was carrying their watering pail up from the creek when I heard a faint whining from somewhere on the other side of the road. A dog is what I figured. I didn’t hear anything else, talking or anything, just that sorry-sounding critter.

I thought it curious, a dog being out there in the middle of nothing. I was never one to stand by while an animal suffered, though, so I went looking for it. I made a soft, chirpy whistle, thinking it couldn’t be far off, but then the sound quieted, and I couldn’t be sure where to look. I had my eye on a spot just south of me, near the base of a big old oak tree, when I thought I saw something move. Maybe it was that pup, maybe a rabbit, a squirrel, or something else; I caught no more than a brief, sidelong glimpse. I kept my eye at the
base of that tree and crept forward a little. I blinked and, just like that, the tree was gone, the oak tree. Just like that—a blink—gone.

The hairs on the back of my neck bristled. I stared. Of course, I knew that what I had just seen, I couldn’t have seen. I squinted and blinked, looked to the left and right and back again, then grabbed hold of a nearby maple sapling to keep myself upright while I gave the woods another goin’ over.

“No,” I whispered. My grip tightened on the sapling. “No, this ain’t right.”

It wasn’t just the one tree; it was all of them. They were, every last one of them, changed, as if they’d been rearranged, as if I’d been dropped on the other side of the world—an entirely different forest. I squeezed my eyes shut and then opened them.

“No.” I turned and looked behind me. For the life of me, I didn’t know where I was or even where to start sorting it out. But then I noticed a ribbon right there in the sapling I was holding onto, just above my hand, tied to a twig. I wouldn’t have thought much of it, given the circumstances, but it was especially queer. I’d never seen a ribbon that color—orange, bright as a setting sun. It had a hold of my eye just as I had a hold of that tree. I thought, why would someone go and put a ribbon in a tree, way the heck out here, in the middle of—

I again glanced about. “This is crazy. It’s crazy.” I took a good solid look at that ribbon and noticed something even more peculiar about it. I squinted. “What the dickens?”

I had to let go of the scrawny trunk below it in order to have use of my hands. They shook as I untied the thing from the branch and continued shaking as I attempted to examine it. The orange strip was made of the strangest material—as thin as the skin of an onion, with a tiny, intricate, woven texture along its length.

The whining, the trees, the ribbon—it had not occurred to me that they might all be members of the same crazy clan. I’d altogether forgotten about the dog—didn’t hear it anymore—and had nearly forgotten about the trees as my attention was so completely fixed on that piece of ribbon in my hand. Then, a movement caught the corner of my eye, and I swung my head to the right. The sapling I had been holding onto just a minute before was gone. I looked to the south. There stood the oak tree in its proper place, the place where it had been deeply rooted for who knows how many hundreds of years. It didn’t take but a moment to realize I was exactlywhere I should’ve been in the first place.

“Move!” I started running, but then quickly stopped as I realized I was headed in the wrong direction. I glanced back at the oak tree, then up toward the treetops, searching for the sun while trying to find my breath. After a moment, I got my bearings and took one last look around to assure I was where I thought I was. “Go! Go!” I scrambled back to the wagon, slipping, tripping, and stumbling over limbs and branches along the way.

I covered almost a full mile before I found a normal breath and, in the time it took to travel that distance, made absolutely no progress in sorting out what had happened. My mind was a tangle of conflicting notions, and the only way to unravel it was to deny as much as I could; I didn’t see the oak tree disappear. Trees, as everyone knows, don’t do anything but stand in the same spot year after year and grow—and slowly, at that. I didn’t see the forest go from one thing, to another, and back again. It was all just a hiccup in my mind.

I held onto that ribbon—put it in the storage box under the seat. Every now and then, I’d
reach down for it, half expecting it not to be there. It was, though. Every time I went for it, it was
there.

Red Adept Publishing is hosting an awesome giveaway over at their site (HERE) for Amazon gift cards and some other book related stuff.  Head over and check it out!  My thanks to Red Adept Publishers for allowing me to be a part of this blog tour.  They made it all so easy.

You can find all the places to purchase The Sun, The Moon and Maybe the Trains by clicking here.

About the Author:
While a past resident of Michigan, Ohio, Illinois, Florida, New York, and Vermont, Rodney Jones now resides in Richmond, Indiana, where he whiles away his days pecking at a laptop, riding his ten-speed up the Cardinal Greenway, taking long walks with his daughter, or backpacking and wilderness camping. His list of past occupations reads like his list of past residences, though his life-long ambition was to be an artist until he discovered a latent affinity for writing. “In art,” Rodney says, “I was constantly being asked to explain images constructed from a palette of emotions and ideas, which usually required complex narratives to convey
their meaning, if there even was a meaning. In writing, the words are creating the images, images are telling a story, the story is evoking feelings. I like it. There’s nothing to explain.”  Rodney’s interests include: art, science, politics, whiskey and chocolate, music (collecting vinyl records), gardening, and travel.