Sheltered by Debra Chapoton and a Giveaway! 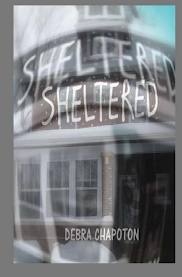 Living together unsupervised, five troubled teens confront demonic forces and are compelled to deal with their problems in distinctly different ways. Paranormal meets psycho meets Goth in this story of a supernatural haunting and budding love.

High school junior, Ben, hacks into his step-father's real estate holdings and provides rooms in an old two-story house to various outcasts: the schizophrenic kid, the angry Goth girl, and the homeless girl who worships him. When Megan needs a place to live she comes to the rooming house with a different set of problems and the ability to confuse and attract Ben.

One by one strange and mysterious occurrences stretch the teens’ beliefs in the supernatural. How they deal with demons, real and imagined, has tragic as well as redeeming consequences.

Oh.  Demons.  Like I will possess you kind of demons.  Not in a paranormal world, but in our real life world.  Scary.  I didn't realize when I started this book exactly what I was in for!

I can't say that I am a fan of the demonic psycho kind of books or movies.  I avoid them like the plague.  Number one, because I am a chicken.  I prefer to feel safe and happy instead of scared and crazy.  Number two, because I just don't like it.  Borderline too real.

I would say that this book made me uncomfortable.  All the demonic forces that possess the kids are freaky.  Ouija boards, chanting and levitating are just not my thing.  I had a hard time with that aspect of it although I know LOTS of people who love that sort of thing in books so I'm sure they will be interested in this book.

Let me tell you about what I did like in this book.  I liked the concept of a group of outcast kids making it together.  All with problems, all needing help.  I thought Ben was an excellent lead character in this book.  His protective, helpful role was awesome.   I thoroughly enjoyed the growing relationship between Megan and Ben.  The ice skating scene was my favorite.  :)

I think the book brings into play several different mental illnesses that generally not understood well.  It was hard to read about the kid planning the shootings.  Way to close to home for many people in recent years that have lived through that sort of horrific event.

I would say that Debra has written a book that will appeal to many people.  Edgy, a bit freaky with a sweet romance.  Probably a perfect Halloween read for anyone in the mood for that.  Here is a excerpt from the book:

Next Wednesday
Emily knew the precise moment that Ben returned, she felt him in her scars. She watched him carry some things to the house, heard the door close; she smiled when she heard him call out that Santa was here. He did that once before, in early December, insisting that she accept the gift he held out, not wanting her to wait until Christmas to use the mittens he knew she needed.
She went toward her door now, wondered what he had brought, and then heard Megan’s voice below. Oh no, he probably brought something for her. She scuttled back to her nest by the window and stared outside, was still staring fifteen minutes later when she saw them walk down the street, Ben shouldering a shovel, his other hand knotted with Megan’s.
She touched the skin on her arms, lightly at first, making it tingle. The image of Ben with Megan multiplied across her mind in broken mirrors, a repugnant picture that reflected her own self-loathing. She scratched at her scabs, felt the pricks of pain force away the ticklish sensations. She closed her eyes.
When she opened them she saw a figure standing at her door.
“Who–?” she started, but the figment waned to less than a shadow. Still, though, there was something at her door.
She rose slowly and held her hand out.
Its face was more womanly now, friendly, motherly. Yes, she knew this face. Its pearly white skin so shocking against the ruby lips, the stringy hair a match to her own. Her mother.
She stretched her fingers toward the face. The hallucination faded then sharpened. The eyes began to blaze. She drew her hands back to her own face. What’s wrong with me? The delusion grieved Emily; all around her fluttered a longing.
And a deadly fear.

As far as content there was swearing, an almost sex scene, violence, self mutilation and some satanic/demonic rituals.

Something I can honestly say is that I love getting to know authors and I appreciate Debra entrusting her book to me for review.  She has so generously offered to provide for a giveaway of Sheltered.  One ebook, open Internationally.  Thanks, Debra!

Debra Chapoton has taught kids of all ages in her main career as a teacher. She has a BA in Spanish and a Master of Arts degree in Teaching English. She started writing in 2002 and was surprised to find out that the characters quickly take over the action and dialogue in the stories.

Her first YA novel, Edge of Escape, was self-published and then discovered by Piper Verlag Publishing and translated into German. Stalking and obsession get a sympathetic twist in this story of physical and psychological survival.

Her second YA novel, Sheltered, detours into a different genre as she writes about five teens who confront supernatural forces. Two boys and three girls all harbor secrets which make some of them susceptible to demon possession. Embracing all things supernatural might protect them, but are they ready for the consequences?

Chapoton has also written eleven chapter books for middle grade kids and a non-fiction work for adults, Crossing the Scriptures.

When she’s not writing Chapoton enjoys the quiet of the full log home she designed and built with her husband. They live in the middle of 62 acres of beautiful woods in northern Michigan.