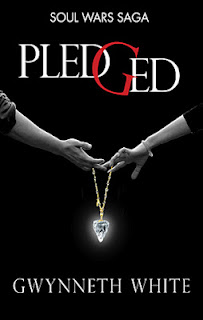 Everyone has a soul mate. But what do you do when your soul mate would rather give his soul to the demons than be with you?


Seventeen-year-old Erin has a problem. Seth has been hers forever, but now an ancient curse is tearing him away. And the demons who invoked it will stop at nothing – even murder – to claim him as their own.

How can she win against a curse so binding that it has damned countless others to this same fate – an eternity alone?

The answer lies in the past. To find it, Erin and Seth must risk all, travelling back in time to a dangerous world where love is forbidden, and life – and death – hang on a pledge.

Follow Erin and Seth as they travel to ancient Shenaya and confront the curse that has plagued their families for millennia. Caught in a war between the Angelic Guardians and the Gefallen, the disembodied dead, they must fight to keep their souls in tact and their love untainted.

First of all, you should check out the trailer for Pledged!  I think it really gives you a very good feel for the book.  (although I think the actors in this look VERY young!)

How would I sum up Pledged?  A time traveling, angel/demon, soul mate, magic stone adventure story with dark and bloody history.  It's a fantasy saga sort of thing and with this book, I know we've only just begun.

Although Seth and Erin are the two main characters in the story there are oodles and gobs of supporting characters.  We literally get to know decades of people in this book.  Sometimes my mind had a hard time keeping everyone straight but by the end you definitely know who is who because they start leaving a real impression on you.  Those bad guys are BAD.  Bad, bad, bad.  Murdering innocent women and children, back stabbing, soul stealing kind of bad.  BAD.

Then you have the good guys.  Well, the guys that you hope will be good but they are sure having a hard time coming up with that.  That's because the BAD guys are so good at being bad that they have a powerful influence over the almost good guys.  Seriously.  Those poor almost good guys.  They are fighting an uphill battle.

Then you have the guardians/angels.  I, personally love the sword wielding female guardians.  You go girls.

I will freely admit that this sort of fantasy adventure genre isn't my favorite.  I'm not sure why but I've just never been a fan.  I'm not going to tell you I'm raving love over this book, but I will tell you that I enjoyed much of it.  It started out slow for me because you have to have a huge history lesson before you finally understand and things get going.  But, when you finally get to that part where things get moving, boy do they move.  There are twists and turns full of action and intrigue.  If you are a fan of the fantasy world, you should check this book out for sure.

Gwynneth White and the folks over at Swallow Press are generously offering up an ebook copy of Pledged for a lucky reader here.  They wanted to make sure it was International so they will be sending out a coupon to pick up a copy of the book at Smashwords.  How nice of them, right?  Just fill out the rafflecopter below.  Giveaway ends 9/17/12.

As far as content, there is frequent mild swearing (including the B word) and a sex scene between an unmarried couple although nothing described in detail.  There are some scenes with human sacrifices and dark magic that were a bit graphic.

Pledged can be purchased from:

a Rafflecopter giveaway About the author, Gwynneth White

I have spent my entire life living in a parallel universe of make-believe characters, only coming back to reality for long enough to check that no one burnt the house down in my absence. A few years ago I decided to commit some of those ‘friends’ and their stories to paper. The Soul Wars Saga is the result of those efforts. Before that I co-authored two non-fiction travel books – The Complete Guide to 4x4 Trails and The Ultimate 4x4 Guide. Both books became instant best-sellers in South Africa. And before that even, I studied a degree in African History and Politics at the University of Stellenbosch in South Africa. When I’m not writing, I am a wife to Andrew, and a mom to Stephanie, Erin, and Kate, our teenage daughters. My family and I live in Cape Town with two dogs, a cat, a horse, and some neglected fish. Now that you know a little about me, I would love to get to know you. Please befriend me at:

Email: gwynnethwhite@4xforum.com
Posted by Getting Your Read On at 3:29 PM