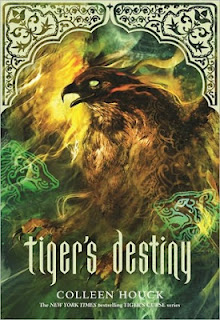 With three of the goddess Durga's quests behind them, only one prophecy now stands in the way of Kelsey, Ren, and Kishan breaking the tiger's curse. But the trio's greatest challenge awaits them: A life-endangering pursuit in search of Durga's final gift, the Rope of Fire, on the Andaman Islands in the Bay of Bengal. It's a race against time--and the evil sorcerer Lokesh--in this eagerly anticipated fourth volume in the bestselling Tiger's Curse series, which pits good against evil, tests the bonds of love and loyalty, and finally reveals the tigers' true destinies once and for all.

AAAHHH!  We've finally come to the end of the Tiger's series.  It's the most bitter sweet thing ever.  It's so hard to say goodbye to characters that you've been invested in for YEARS now but on the other hand, it is so nice to finally have an ending with no desperate cliff hangers.  There is something to say for closure.

This book took my emotions all over the place.  It was an awesome ride and I was fully invested from the beginning to the end.  I love how all the gifts were brought together and how all the pieces of the puzzle finally fit.  This was a fantastic ending to a fantastic series.  One of my very favorites.  My daughter loves these books.  She's read them so many times I've lost track.

I love Ren, Kishan and Kelsey.  I really can't say too much about the book without giving away the surprises and such, but I am satisfied and mostly happy at the ending.  :)  I'm so glad I own all these books so I can revisit this series whenever I want.

I'm love Colleen Houck's writing and I can't wait to see what she has in store for us next.
Posted by Getting Your Read On at 9:39 AM