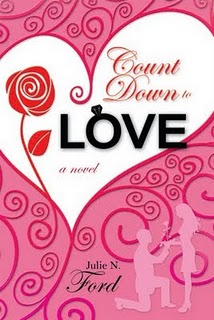 Hey everyone!  I'm so excited to be a part of this blog tour for Count Down to Love.  This is a book I have previously reviewed so instead of rambling on and on about it's awesomeness, and how much I loved it (I think the word I used in my review was actually YUMMY), I will instead direct you to my previous review.  Click Here.

Today I have a guest post from Julie N. Ford that you will love reading.  She is a funny gal and I'm so happy she took the time to share a piece of herself with us today.  Thanks, Julie!  Following the guest post is the giveaway (INT) so stay tuned for that!

Count Down to Love and Submission Anxiety Disorders

What more can I say about Count Down to Love on this tour that I haven’t already said? I’ve discussed how it’s a story about a washed up country singer who gets dumped at the alter and then ends up on a reality show akin to the Bachelor. I’ve talked about writing the song and the story behind the story. So what next?

Humm . . . I was wondering when I ran across a blog post I’d written while querying potential publishers with this very manuscript. I know many of you out there are aspiring authors and/or currently in the process of submitting your work so I thought you might enjoy—maybe even relate to—my frustration.

Recently, I received some feedback on my latest novel (Count Down to Love). First, the editor complemented me on my characters and dialogue, which was nice, but then she went on to categorizing me as the kind of author who tends to “tell” instead of “show.” Now I will admit that I did incorporate the occasional flashback and introspective, some of which I agree needs to be reworked, but when did it become a crime to write a novel with a nice balance of dialogue and narration. And it wasn’t as if I didn’t know what I was doing when I wrote the offensive telling. If my dialogue was “enjoyable” and my characters “interesting” then obviously I know how to “show.” I wasn’t suffering from some sort of multiple personality writing disorder that caused my writing style to shift from showing to telling and then back again without my knowledge.

But then if such a disorder did exist maybe psychotherapists could come up with a Cognitive Therapy to treat it? Something like an annoying alarm that sounds whenever an author writes a paragraph containing more than four sentences, followed by a voice reminding the writer that it’s best to dial-down the narration—more people will read the book if the author uses fewer words. The goal of the therapy being that, over time, the author is able to move past the “irrational” idea that good literature is about plot and characterization. And instead, adopt the “rational” idea that the pace in which a reader can sprint to the last page determines the value of the work.

And support groups as well?

“It’s been three weeks since I last info-dumped . . . and although I have the urge to describe what my character’s are feeling and/or seeing with the beautiful, flowing words of the English language, I try to resist. Instead, I put all my narration into snappy and, at times, witty dialogue instead.”

The group then claps, reciting the mantra:

“Literature is outdated, fluff sells, pacing is the only thing that matters!”

And pharmaceuticals? Maybe the drug companies could invent a pill for this disorder?

List of side effects: Possible loss of creativity, empathy, and/or ability to think outside of the box. And in rare instances, patients exhibiting editor-like behaviors have been reported. If such side effects should persist, discontinue submissions. You’re more than likely experiencing Stockholm syndrome and not multiple personality writing disorder.

Okay, maybe that was a low blow. Although criticism feels brutal at times, I will admit that much of it has made me a better writer. However, saying to a modern author that she has a tendency to “tell not show” is downright insulting. It’s criminal really; the emotional abuse literary “experts” feel entitled to bestow upon us humble authors.

In fact, the anxiety caused by querying could result in a new differential diagnosis being added to the DSMIV under Post-traumatic Stress Disorder—Submission Rejection Disorder (SRD). It would read something like:

An immediate response upon receipt of a reply to a manuscript submission from an agent and/or publisher either electronically or by snail mail. The traumatic event is re-experienced persistently by one or more of the following symptoms.

1. Uncontrollable shaking in the hands producing an inability to properly click a computer mouse and/or tear open an envelope in order to retrieve the correspondence.

2. Sweating in, but not excluded to, the upper lip, forehead, neck and/or palms of the hands.

4. Unexplained onset of dyslexia and/or blurring of letters and/or words that render an otherwise literate person unable to process a message of refusal written in his/her native tongue.

5. A temporary state of hysteria that manifests in the form of impulses that may lead the individual to purge his/herself of all original manuscripts, and evidence of the aforementioned existence, from computer and relative living space including blogs, email and facebook, by way of deletion and/or shredding thereby allowing the individual to claim such works never existed.

6. A strong urge to abandon the writing profession and take up skydiving.

7. Complete and utter denial that the editor and/or agent perpetrating the onset of SRD has any idea, whatsoever, what he/she is talking about.

Why do authors and editors feel the need to persist with these dysfunctional, codependent relationships? Outside of grammar and punctuation, it’s like the powers that be came up with rules like “showing not telling,” “point of view shifts” and word count limitations just to keep us authors chasing our own tails. In fact, it was the very rule regarding word count that had me incorporating the occasional flashback and info-dump just to get the entire plot to fit within the publisher’s guidelines. If I had shown the entire story, would I have then been criticized for making the manuscript too long? Where does it end?

Currently, I’m reading a book by an author whose novels are best sellers on two continents, being made into movies . . . on two continents. But talk about “telling.” This author literally does nothing but. Even some of the dialog reads like info-dump.

With so many different tastes and preferences in literature why should there be so many “rules” when, ironically, the majority of the novels that become bestsellers don’t follow most of them. I’m almost tempted to say that agents and publishers have come up with all these “rules” because it would be too “telling” to actually say . . .

I regret to inform you that I will be unable to represent your work at this time due to the unfortunate fact that you have no important connections in the literary world and thus no significant name recognition to speak of. In other words, it doesn’t matter how well you write, we can’t make any money off you. Good luck with self-publishing.

I hope you’ve enjoyed this little jaunt into the maniacal mind of a desperately-trying-to-get-published author.

Thanks to Aimee for allowing me to guest post on her blog. And to all those readers who have, or will, read Count Down to Love.

As part of the tour, Julie is generously offering a grand prize giveaway of a hard copy of Count Down to Love, a CD of the band Due West, and a copy of the single, “Who I Am”, which Julie and Due West wrote and recorded specifically for the book. All you have to do to enter is leave a comment on this post or any of the other stops on the tour. (Visit the tour page for the full tour schedule.) The more stops you comment on, the more entries you have into the contest!

Julie is also generously allowing for an ebook giveaway here on my blog to one lucky reader!  How awesome is that?!  Enter in the rafflecopter below.

Posted by Getting Your Read On at 5:00 AM