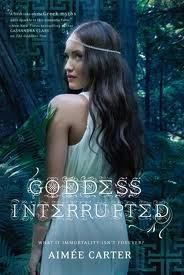 BUT IF SHE WANTS A LIFE WITH HENRY IN THE UNDERWORLD, SHE'LL HAVE TO FIGHT FOR IT.

Becoming immortal wasn't supposed to be the easy part. Though Kate is about to be crowned Queen of the Underworld, she's as isolated as ever. And despite her growing love for Henry, ruler of the Underworld, he's becoming ever more distant and secretive. Then, in the midst of Kate's coronation, Henry is abducted by the only being powerful enough to kill him: the King of the Titans.

As the other gods prepare for a war that could end them all, it is up to Kate to save Henry from the depths of Tartarus. But in order to navigate the endless caverns of the Underworld, Kate must enlist the help of the one person who is the greatest threat to her future.

I was kind of unsure if I wanted to read this.  I really liked the first book and I was looking forward to the second book.  I've read a lot of not so good reviews for it though.  People say Kate is whiny and annoying.  BUT, I'm glad I read it.  I liked it and I think it's a perfect set up for the third book which I wish I could read TODAY.

I gobbled this book up.  It kept me interested.  I felt Kate in this book.  I felt her insecurities and self doubt.  For me, it was a good thing.  I think it's the times that life feels hardest and you feel the most doubt but choose to carry on that tells the real tale of who you are.  I felt like Kate had this going on.

Yeah, Henry is kind of a dumb head.  Not so brilliant when it comes to love.  But, I have hope that he'll figure it all out in the end.

Persephone is a character I hope we continue to get to know better.

Content:  some mild swearing and talk about sleeping around and sexual encounters.