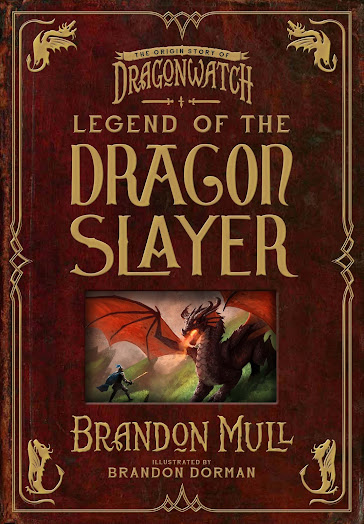 In ancient times, dragons posed the ultimate threat to the rest of the magical world. During the Dragon War, a group of specially trained Dragon Slayers banded together to stand against the onslaught. They called themselves Dragonwatch, and they succeeded in confining the majority of dragons to sanctuaries. Legend of the Dragon Slayer is the illustrated story of the very first Dragon Slayer who took to battle.

As the legend tells it, powerful monsters terrorized the kingdom of Selona on all sides. An unlikely hero named Konrad, the cobbler's son, accepts the king's challenge to defeat the monsters: fierce yeti, a merciless vampire, a dangerous gorgon, and a deadly phoenix. But Selona's biggest threat will come from the Dragon, and it will take every ounce of wit and experience that Konrad has acquired to stand a chance against such a formidable foe.

Legend of the Dragon Slayer features a never-before-published catalog of Dragon Slayers, a detailed map of the kingdom of Selona, and lavish full-color illustrations. Fantasy fans will love this stand-alone tale of valor, destiny, and magic.
* Amazon * Goodreads * Deseret Book *
What a fun book!  This is a collection of stories all about Konrad and how he grew into a dragon slayer in the kingdom of Selona.  His adventures helped the kingdom expand by defeating the monsters that surrounded it.
Konrad really stepped up to the plate when nobody else would.  He was a good defender (an even better storyteller) and a great hero to root for.  His legacy established the Fair Folk of Fablehaven and that's how it all ties together.  If you haven't read the Fablehaven/Dragonwatch series, you really should.  It is fantasy at it's best and suitable for all ages and the perfect series to read aloud to younger children.  This book has such beautiful illustrations!  It is fun to see the story spring to life through the vibrant pictures.  I wish I could show you the pictures!
I first obtained this book as an ebook for review and it was okay but I was so excited when I was offered a physical book for review as well.  The book is beautiful from front to back cover and I loved being able to hold it in my hands.  It's one of those kind of books and definitely one you want to add to your collection- especially if you own this series!
Content:  mild peril

Brandon Mull has worked as a comedian, a filing clerk, a patio installer, a movie promoter, a copywriter, and briefly as a chicken stacker. For a couple of years, he lived in the Atacama Desert of Northern Chile, where he learned Spanish and juggling. He and his wife Erlyn and their large family and a dog named Buffy the Vampire Slayer live in a Fablehaven-style house with an attic filled with peculiar artifacts. Brandon is the #1 New York Times best-selling author of the Dragonwatch, Fablehaven, Beyonders, and Five Kingdoms series.

Brandon Dorman grew up near Tacoma, WA and is the dad of three boys and one girl. He is best known for his book cover art on popular series like Fablehaven, Goosebumps, and The Land of Stories. He is an accomplished visual storyteller who has illustrated 21 picture books.

Posted by Getting Your Read On at 7:33 PM