A Portrait of Loyalty (The Codebreakers #3) by Roseanna M. White 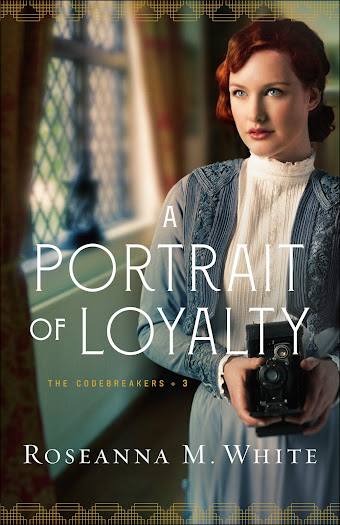 Zivon Marin was one of Russia's top cryptographers, until the October Revolution tore apart his world. Forced to flee after speaking out against Lenin and separated from his brother along the way, he arrives in England driven by a growing anger and determined to offer his services to the Brits.

Lily Blackwell sees the world best through the lens of a camera--and possesses unsurpassed skill when it comes to retouching and recreating photographs. With her father's connections in propaganda, she's recruited to the intelligence division, even though her mother would disapprove.

After Captain Blackwell invites Zivon to dinner one evening, a friendship blooms between him and Lily. He sees patterns in what she deems chaos; she sees beauty in a world he thought destroyed. But both have secrets they're unwilling to share. When her photographs reveal that someone has been following Zivon, his loyalties are called into question--and his enemies are discovered to be far closer than he'd feared.

This series is so good!  I love historical fiction and these stories have a fresh take on lives in intelligence during war.  This one was a bit different as it dealt with pictures instead of codes but happened in the same building as the other books so previous characters were still around and involved in this story too.  I think these books can stand on their own but I would highly recommend reading them in order.  They are all so good.

I loved Zivon.  LOVED him.  The way he thought things through and tried so hard to be a good person.  He had depth and loyalty.  Lily was pretty great as well and I loved how her talents for photos were used in this story.  I never really gave thought to how photo editing was done back then or even that it was a thing that could be done.  I learned something new while being entertained.

This story started off slow for me.  It took me a bit of time to become invested in it but it did happen.  The story has a slow build to it and by the end of the book I was completely hooked- feeling the emotions and invested in the outcome.  This is probably one of my favorite historical fictions series and definitely my favorite this year.

Posted by Getting Your Read On at 4:02 PM