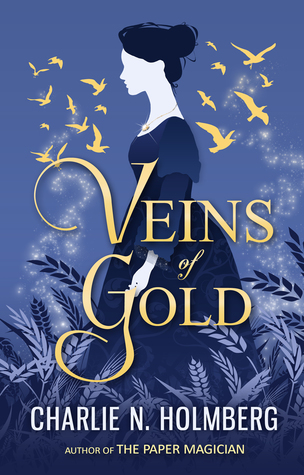 Winn not only sees the magic, but controls its hunger by feeding it gold—the very thing Gentry’s father left to acquire. But the earth’s unrest only grows worse, and Gentry’s fear leads her to a terrible choice: marry a wealthy man she does not love, or trust in Winn’s unpredictable power to save her family.

This book incorporated so many interesting dynamics.  It was a little bit history- set during the time of the California gold rush but the characters were in Utah.  It was also magical, which twisted the story around and made it far from a historical novel.  I loved the earthy feel that weaved itself into everything and everyone.  The land, animals and people were all connected and it was cool.  The author took something that I'm familiar with and turned it into something full of imagination.

I really think the best word I can use to describe this book is interesting.  I was so interested in knowing where this book was going and where it would end up.  When I had to put it down, I was thinking about it, anxious to get back and see what would come next.  I like when that happens!

This is actually the first book I've read by this author.  I have a couple of her books, but haven't read them yet.  I'll have to remedy that soon!

Oh!  And one more thing.  I love when a cover is a perfect representation of the story inside.  This is cover is exactly that.  And it's pretty too.  :)

Content:  A couple instances of mild swearing, mention of a mother's infidelity.