Sugar and Spice (The Glitter and Sparkle Series Book 3) by Shari L. Tapscott 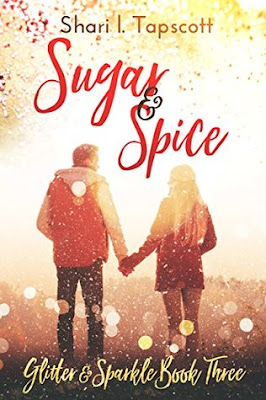 Fueled by love and determination, twenty-one-year-old Harper took a great leap of faith and transferred home from college to finally declare her feelings to Brandon, the boy who's adored her since they were children.

There was only one thing that could derail her perfect plan, and that was Brandon showing up with a new girlfriend the very same weekend.

Now slightly bitter and irked at the world, Harper focuses her time and attention on making her sister's childhood dream come true: she's going to meet Mason Knight, former lead singer of the wildly popular Forever Now band. All Harper has to do is bake her way onto the nationally televised, holiday cookie competition he happens to be judging. Easy. Until she finds herself partnered with Sadie--Brandon's vapid, wide-eyed, hair-of-many-bottle-blond-colors girlfriend.

Just when Harper's ready to throw in the towel, she collides with entitled, pretty-boy, celebrity-judge Mason. Except he's not entitled, and with his sharp eyes and chiseled jaw, there's nothing pretty about him. Suddenly, Harper doesn't just want in the competition--she wants to win. Even if that means she has to play nice with Sadie to accomplish it...

This books is SO CUTE!  I just loved it.  It was light, easy reading and I had a lot of fun delving into Harper's world.  The cooking show aspect was fun, especially since they were baking cookies!!  Yum.

Harper felt real and easy to relate to.  She has a humor that appealed to me and made me smile.  Harper is a kind person, even when she wants to be mean.  I really did like her.  I also loved the blushing interactions she has with Mason.  There is crackling attraction there and that always draws me in like a moth to the light.

I love Shari Tapscott.  Her writing style just resonates with me.  I started with her Eldentimber series, which is one of my all time favorites (and the first book in this series is FREE), then continued with her Silver and Orchids series.  Both of those series have a touch of the mystical and magical about them.  This Glitter and Sparkle series is YA contemporary and while different from the other two, still a fun series.  You don't have to read this series in order but you will probably enjoy it better if you do.  :)

Posted by Getting Your Read On at 7:59 AM