A Matter of Trust (Montana Rescue #3) by Susan May Warren 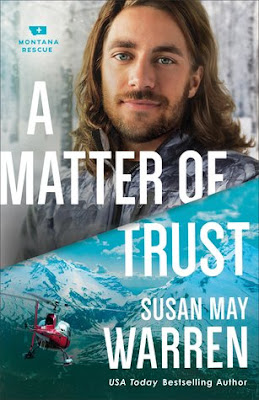 Champion back country snowboarder Gage Watson has left the limelight behind after the death of one of his fans. After being sued for negligence and stripped of his sponsorships, he's remade his life as a ski patrol in Montana's rugged mountains, as well as serving on the PEAK Rescue team. But he can't seem to find his footing--or forget the woman he loved, who betrayed him.

Senator and former attorney Ella Blair spends much of her time in the limelight as the second-youngest senator in the country. But she has a secret--one that cost Gage his career. More than anything, she wants to atone for her betrayal of him in the courtroom and find a way to help him put his career back on track.

When Ella's brother goes missing on one of Glacier National Park's most dangerous peaks, Gage and his team are called in for the rescue. But Gage isn't so sure he wants to help the woman who destroyed his life. More, when she insists on joining the search, he'll have to keep her safe while finding her reckless brother, a recipe for disaster when a snowstorm hits the mountain.

But old sparks relight as they search for the missing snowboarder--and suddenly, they are faced with emotions neither can deny. But when Ella's secret is revealed, can they learn to trust each other--even when disaster happens again?

I absolutely love this series by Susan May Warren.  Well, this and the Montana Fire series.  They are both so good.  They have cross over characters that really give you a sense of community and family.  Each book feels like coming home.

Just like previous books in this series, this book is full of danger and adventure set in the great outdoors.  I loved the forward momentum in this story and how I was on the edge of my seat, holding my breath and white knuckled gripping my kindle for half the book.

Gage is a snowboarding magician- the greatest back country boarder of his time.  He's known for his no fear attitude and love for the thrill of danger.  Then something went wrong and that hotshot life he knew was wiped away.  You can't help but feel sympathy for Gage who got the raw end of a deal.  While trying to be the hero, he was made out to be a villain.  Now he's rebuilding his life and finding value in helping other people.  I thought Gage was savvy and an all around solid character.  I really liked him.

The other thing I love about these books are the side stories going on around the main story.  It sets the stage for future books by giving you a prequel of sorts.  I cannot wait for the next book!

- I received a copy of this book from the publisher.  A positive review was not required and all opinions expressed are my own.
Posted by Getting Your Read On at 8:28 AM