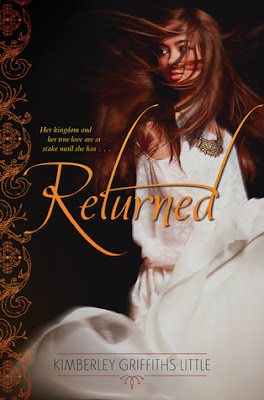 After tragedy strikes on the day they were to wed, Jayden must support Kadesh as he ascends the throne and becomes king of Sariba. But with the dark priestess Aliyah conspiring to control the crown, and the arrival of Horeb, Jayden’s former betrothed, Kadesh’s kingdom, as well as his status as king, is at stake.

Jayden knows that the time to be merciful has come and gone, and that some enemies can only be halted by death. Now she and Kadesh must prepare to fight not only for their love, but also for their kingdom.

This is a series I have loved from the very beginning.  I have been waiting for this final third book to finally make it to my hands.  The last book left off in such a crazy place that left me feeling a bit desperate.  I don't like that feeling but finally the wait is over and the last book is HERE!  Yay!  This book picks up exactly where the last book left off.  It's like I never left (Well, except for the months of waiting in between.  There was that.).  If you haven't started this series, how lucky you are that you can read one right after another with no waiting at all!  This book is meant to be read last.  You will not understand what is happening if you do not read these books in order.

This series is really jam packed from beginning to end.  There is constant movement, danger and activity happening.  It's intense and somewhat consuming.  I am always drawn in and kept captive while reading these books.  This book whole book basically revolved around war.  I felt like this story was more plot driven and less character driven because I guess we had two books to get to know the characters and now the plot is in full force for a climactic ending.

I was so glad to get to the end.  Resolution always feels so good after a series like this.  It was a hard fought ending and not everything turns out rosy (boo) but still, it's nice to be at the end of a good series.  Sigh.

Content:  war and violence (some graphic in nature), black magic and human sacrifice