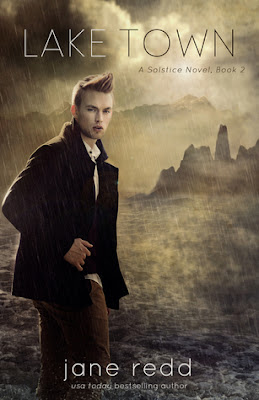 Jezebel James is on the run after her true abilities are discovered by the Legislature, and the only one who can protect her is Sol. In order to survive, Sol sends her into an underground hideout where she quickly discovers all that she thought was true in her dying world is false. Jez reunites with Rueben and his band of insurgents, and together they escape to Lake Town, only to find that the entire island is preparing to invade the City.

But Sol has been left behind and forced to join the ranks of the Faction, who are working against the Legislature from within. As Jez works with the insurgents and their plan to destroy the City, she learns that attacking the City might save thousands of lives, but it will destroy Sol, the man she knows she can’t live without.

Lake Town is the second book in the Solstice series.  If you haven't read book one, Solstice yet, it is free on Kindle Unlimited or just .99 cents to buy!  Yay!

This is a dystopian series and Lake Town picks up right where Solstice left off.  Jez is on the run and Sol's friends are helping her.  They escape the Legislature and make their way to Lake Town where Jez learns more about the rebellion and her place in it.  Sol and Jez spend most of this book apart, fighting and planning in different places.  I wished they were together on more than one occasion but that's okay.  I'm hoping the next book finds them fighting together.

All kinds of crazy things happened in this book that kept me on my toes.  I was invested and interested and really hoping things would work out.  Of course, resolution didn't come in this book so I guess I'll just have to wait for the next book!  I'm not very good at waiting.

A few years ago paranormal and dystopian books were everywhere and I was reading them all the time.  Now I'm only picking up a few here and there.  I've missed this genre and it was good to get my hands on one that I really enjoyed reading.