The Gift of Lies by Norma T. Rudolph 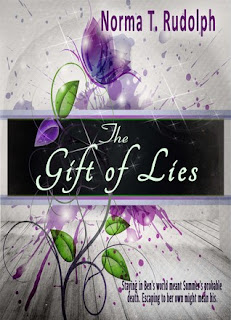 The locals call the place Jake’s Hell after Summer McCalister’s crazy uncle Jake who claims to have seen impossible things there. It’s a badlands of rugged rock cliffs and sharp pinnacles that no sane person would attempt to enter. The Atomalians call it Daneye, a secret alien city of unequaled beauty, masked behind illusion. Atomalians believe that natives of Earth must never know about them and their powers of the mind or it will destroy the Atomalians’ peaceful lives. When Summer is drawn out of bed and pulled to Jake’s Hell by an urge she can’t control, she fears she’s crazier than her uncle. But when the young Ahtomalian, Bentri, steps out of thin air, she knows she’s either crazy—or dead. Taking her to his unbelievably beautiful city doesn’t erase the fact that he’s keeping her hostage in a room with no door and no way out. Bentri’s world is suddenly and completely devastated by the appearance of the native Earth girl. If she’s discovered within the city, law decrees she be destroyed. As Bentri is bonded with her, that means he would also die. Their only chance might be to escape—but can Bentri survive in her world?

This book is a young adult sci-fi, fantasy/paranormal kind of mix.  I would say it would probably please the younger end of the YA spectrum better, maybe even middle grade readers.  The story here is very simply written.  It had more telling and less feeling but it was a good story with a lot of imagination.  I can imagine a 12 or 13 year old (boy or girl) reading this and enjoying it.

As for me, I felt it lacked the tension and emotional build up that I like to see in books. I could easily picture the places and scenes described which was a fantastic thing, but I just wasn't feeling it. There were points that I did some skimming and was still able to keep up with what was happening.  The "history" read from the scrolls went on for pages and it was hard to read. It felt like the author needed to explain a whole bunch of things and needed a way to do that in one fail swoop.  It read just like a history lesson.

Bentri probably had the most character development.  He has always been taught that "natives" are lesser beings with little intelligence and he treats Summer accordingly.  Actually, he treats her abominably.  Gradually he realizes that "natives" are intelligent and gifted.  His prejudice's diminish and he becomes kinder.  There is a good lesson in that.  What we think we know may not always be correct- especially regarding people.  The more time we spend knowing and trying to understand others, the better off we will be.  Prejudices are never good, and rarely correct.

This book is clean- no swearing or sexual content, which I always greatly appreciate.

Labels: Clean, Paranormal/Fantasy, Science Fiction, The Gift of Lies, YA